New this weekend: Cold Pursuit, Capernaum, The Passenger, On the Basis of Sex 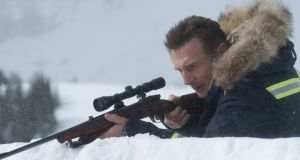 COLD PURSUIT ★★★★☆
Directed by Hans Petter Moland. Starring Liam Neeson, Tom Bateman, Tom Jackson, Emmy Rossum, Domenick Lombardozzi, Julia Jones, John Doman, Laura Dern. 16 cert, general release, 118 min
Yes, this is the film Liam Neeson was promoting when he went off the rails. The film-makers will regret that his unwise remarks have distracted from the actor’s best action film since The Grey. He plays a snow plough driver who goes on a rampage after his son is killed by hoodlums. Adapting his own Norwegian film In Order of Disappearance, Moland displays a cinematic gift that favours balance over flair. The humour is pitch black. The violence is insanely heightened. Full review  DC

The blub tells us that Labaki’s film concerns a poor Lebanese child who sues her parents for bringing her into this awful world. Eugh? Don’t worry. That framing device is mere decoration on a stunningly effective neo-realist drama concerning a child set adrift in Dickensian poverty. The director’s skill in manipulating her hero’s progress through an endlessly dangerous city and in drawing a relaxed, sincere performance from young Zain Alrafeea establishes her as an impresario of some genius. Hugely powerful melodrama.  DC

Nicholson plays a jaded reporter making a documentary about post-colonial Africa, who exchanges his identity with that of a man he finds dead in a hotel room. This attempt to remedy an existential crisis allows him to start a romantic relationship with a younger woman (Schneider) but it does tie him to certain appointments made by the dead man, including a jaunt to Munich where he meets with guerilla representatives. It transpires that his new identity is that of an arms dealer. To further complicate matters, his wife and friends are looking for him. “That’s what you wanted, isn’t it?” asks his girlfriend. But of course it isn’t; he’s now housing two existential crises in one body. Body swaps don’t get more nihilistic than this enigmatic 1975 classic. TB

Ruth Bader Ginsburg (Jones) is a first-year student at a male-dominated Harvard Law School. When her husband Martin (Hammer), a second-year student, falls ill with cancer, she attends both his lectures and her own. No law firm will hire Ruth, even though she graduated top of her class, so she ends up in academia until her husband brings a tax code case to her attention. Might Section 214 of the Internal Revenue Code allow the future US supreme court judge to take on the entire damned system? There’s nothing in Daniel Stiepleman’s screenplay that captures the sense of mischief and discovery that jollies along the concurrent RBG documentary. On the Basis of Sex is well-intentioned, cheesily enjoyable and rather uninspired. Full review TB

Jenkins’s wonderful follow-up to his Oscar-winning Moonlight adapts James Baldwin’s novel concerning a New York couple caught up in the malign jumble of legal evasions and societal dishonesties that worked to constrain African-Americans in the 1960s. Layne is the young pregnant woman fighting to stay aloft when her partner (James) is wrongly convicted of rape. The massed harmony of lighting, music and set dressing sets Beale Street apart. Both beautiful and angry. Full review DC

McCarthy excels as boozy Lee Israel, the real-life biographer of Estée Lauder and Tallulah Bankhead, who, in the early 1990s, launched a second career as a forger of literary correspondence. Grant (like McCarthy, Oscar-nominated) is her even boozier, serially untrustworthy pal. The compactness of Can You Ever Forgive Me? has invited inevitable under-appreciation. It’s a great New York movie. It’s a great film about friendship. It’s also a great cat movie (if that’s your bag). Full review DC

Other ★★★★☆ and ★★★★★ movies out and about: All Is True, Bohemian Rhapsody, The Camino Voyage, The Favourite, Free Solo, How to Train Your Dragon: The Hidden World, Spider-Man: Into the Spider-verse, Three Identical Strangers

What should you do if you think you might have coronavirus?