On The Basis of Sex: Cheesy telling of Ruth Bader Ginsburg’s life story

Review: Too often the film strains as it – oh, the irony – juggles its subject’s home life and career 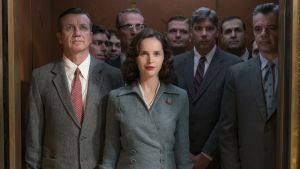 Film Title: On the Basis of Sex

Ruth Bader Ginsburg (Felicity Jones) is a first-year student at a male-dominated Harvard Law School. When her husband Martin (Armie Hammer), a second-year student, falls ill with cancer, she attends his lectures and her own. No law firm will hire her, even though she graduated top of her class, so she ends up in academia until her husband brings a tax code case to her attention. Might Section 214 of the Internal Revenue Code allow Bader Ginsburg to take on the entire damned system?

Following on from the popular bio-doc RBG, On the Basis of Sex is the second hagiographic film this year to chronicle the life and legal impact of the US supreme court justice and cult favourite.

We get the now obligatory shot of the real world RBG before the final credits, but in other respects this is a card-punching, by-the-numbers, cradle-to-grave account with narrative jump-cuts signalled by hairstyles. Closing courtroom scenes in which the Ginsbergs take on Jack Reynor’s establishment slick are effectively rousing yet reliant on such weary tropes as “microphone screeches as our nervy heroine takes the stand” and “nervy heroine stops being nervy and nails it”. Mychael Danna’s score swells appropriately along.

Too often, Mimi Leder’s reverential film is straining as it – oh, the irony – juggles its subject’s home life and career. Kathy Bates as a pioneering feminist and Justin Theroux as an ACLU tough-talker don’t get nearly enough screen time. Jones and Hammer have a lovely, easy chemistry that holds the picture together whenever it threatens to come apart at the seams.

Despite Jones’s best efforts and an awfully convincing Brooklyn accent, there’s nothing in Daniel Stiepleman’s screenplay that captures the sense of mischief and discovery that jollies along the RBG doc. On the Basis of Sex is well-intentioned, cheesily enjoyable and a little uninspired.