Oscars 2019: Inside the scramble to make the awards shorter 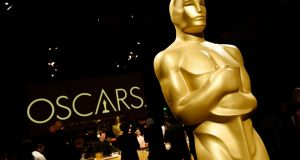 An Oscar statue is pictured at the press preview for the 91st Academy Awards Governors Ball earlier this month. Photograph: AP

The lead producer of the 91st Academy Awards, Donna Gigliotti, was in high spirits on Friday morning. Serena Williams had been confirmed to appear on the telecast in a moment involving A Star Is Born. Thousands of red roses for the set were en route. With nine days until showtime, everything seemed to be coming together.

Then her phone rang. Officials from the Academy of Motion Picture Arts and Sciences were on the line. They told her that they were bowing to pressure and abandoning their plan to shorten the ceremony by awarding four trophies during commercial breaks, with the winning moments being edited and aired later in the show. Gigliotti would have to quickly retool the broadcast so that every Oscar was presented without edits, in the traditional manner.

And the officials had a question: Could she still deliver a three-hour telecast – max? Pretty please? “The answer was no,” Gigliotti says over the weekend. The film academy has been fighting over how to keep the Oscars to a reasonable running time since at least 1987. The reason is simple: protecting television ratings. After three hours, academy research has shown, people on the east coast go to bed, dragging down overall viewership numbers. People on the west coast also move on. Three hours of watching Hollywood celebrate itself – last year’s show was nearly four, not counting red-carpet coverage – seems to be most people’s limit.

The need to rethink the telecast has become a top priority since last year, when only 26.5 million people tuned in, a drop of nearly 20 percent from the previous year. Just a few years prior, the Academy Awards had an audience of 43.7 million viewers. Every potential solution the academy has announced, however, has gone down in flames.

Plans to add a category for achievement in “popular” film were cancelled after pushback from academy members. After cries of protest, the academy backtracked on its decision to rotate a few categories into the commercial breaks, as award shows like the Tonys have done in the past.

So where does that leave Gigliotti? “It would make for a good story if I had a nervous breakdown,” says Gigliotti, who began her Hollywood career as an assistant to Martin Scorsese and went on to work for Harvey Weinstein and Barry Diller. “But any producer worth her salt is used to these kinds of things. You find a new way.”

She continues, “We were hired to deliver a shortened show. How do we do that so you’re not seeing award, award, commercial, award, commercial, award? So boring. People at home want to be entertained.” Dawn Hudson, the academy’s chief executive, said in an email that the organization would “continue to discuss how the Oscars can evolve – to keep engagement strong, to reflect the increasingly global nature of the film business and our membership.” She added, “If we have learned anything over the last few months it is that people feel very connected to the Oscars. Everyone has an opinion and a passion.”

Gigliotti and Glenn Weiss, the telecast’s co-producer and director, would not estimate how long the February 24th show would stretch, except that it would almost certainly be more than three hours. But the event (aired by ABC) will still move much faster than last year, they said, in part because there is no host.

After an initial choice for the job, Dwayne Johnson, was unavailable, and their eventual selection, Kevin Hart, stepped down after his past anti-gay ramblings on Twitter were rediscovered, the producers decided to go hostless for the first time since 1989.

“Ultimately we decided to try and use the host situation as an opportunity – a way to get to that three-hour mark,” Weiss says. Last year, for instance, Jimmy Kimmel served as host and gave an 18-minute monologue, with commentary about the #MeToo movement and jibes about president Donald Trump. This time around, the producers expect the first award to be handed out around the six- or seven-minute mark.

The producers would not say how the show would open. “We have a very strong plan,” says Weiss, who won an Emmy in September – and asked his girlfriend to marry him during his acceptance speech – for having directed the 90th Oscars. But they did disclose a few tidbits about what to expect from the broadcast. Brief presentations of the eight best picture nominees, for instance, will be “sprinkled” throughout the show, Weiss says. (Last year, the best picture presentations were condensed into a single four-minute montage that aired just before that category was awarded.) Eight people from outside the world of entertainment will give the presentations, speaking about what the films mean to them; Williams will give the one for A Star Is Born.

“Along with inclusion, which we definitely want to embrace, the big theme of the show is about movies connecting us – not in this theater but in a big, sweeping, cultural way,” Gigliotti says as she walked through a chilly Dolby Theater, wearing a puffy winter coat. “There are so many things to balance. Some viewers want to see glamour. You have to pay attention to where there is humor and where there is music. When do we guess that people at home might get up to make popcorn in the kitchen, and what can we have on right after that to bring them back?”

Gigliotti, who won an Oscar for producing Shakespeare in Love and has been nominated three other times (Hidden Figures, The Reader, Silver Linings Playbook), said that there were no plans to incorporate regular people into the show, as Kimmel did in recent years. “I love everyday people,” says Gigliotti, who lives in Manhattan. “I ride the subway with them every day in New York. Everyday people don’t get me ratings.”

Oscar viewers will also notice a very different stage design. Instead of the over-the-top jewel box look of recent years, the proscenium is one color – gold – and curves and swoops like a Frank Gehry building, extending out into the theater. It was designed by David Korins, who is best known for his work on Broadway.

“We wanted it to feel different,” Weiss says from Row C in the theater, gazing upward. “It almost comes out and hugs you,” Gigliotti says.

Work to revamp the telecast so that all of the 24 Oscars are presented live started immediately on Friday afternoon, Gigliotti says. A couple of staffers were “running around with their heads spinning around,” she says. “But mostly we just got to work. It’s just about rebalancing the flow.” The four categories were cinematography, live-action short film, editing and makeup and hairstyling.

Gigliotti and Weiss returned to the theater at 9 am on Saturday. He headed to the stage to work on camera angles. She holed herself up in the bowels of the theater to keep tinkering with the telecast master plan, which was laid out on a colossal whiteboard, every minute mapped out using color-coded magnets. “Right now, I’m feeling pretty good,” she says.

She wasn’t the least bit rattled? How was she keeping her focus amid the seemingly endless online dust-ups that have surrounded the Oscars this year? “Easy,” she says. “I don’t know how to use Twitter.” – New York Times