Momentum from tournament packed full of storylines must not be squandered 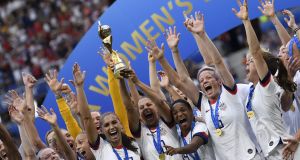 What if I told you that sports and politics can intersect? That it’s possible to stand for something and dominate your respective field, and that one woman can be a catalyst for change and a target for anybody that inhibits them? What if I told you that a team who were unapologetic and opinionated would be the team that would eventually become unbeatable? What if I told you that this year’s Women’s World Cup would not only highlight the gulf between teams and nations that do and do not invest in the women’s game but also celebrated everyone’s achievements in overcoming the various challenges their teams would meet?

These were the narratives throughout the 2019 World Cup, and although the stories off the field attracted people to their TVs, the football on the pitch was not bad either. The World Cup has now drawn to a close, but it certainly left its imprint on the global football community’s minds.

Firstly, this summer of football was dominated at the beginning with the use of VAR. We all sat there day after day, week after week, waiting, watching and wondering as referees stood there, fingers in their ears, while in a room they looked at replays . . . or didn’t.

Who knew that a baker’s dozen would have such an effect on women’s football?

While the VAR and officials were being questioned left, right and centre, for one Irish official, Wexford’s Michelle O’Neill, it was an occasion she was absolutely born for. It’s not often Ireland can celebrate having a say in an international football final, but as O’Neill stood in the centre with her medal around her neck, about 200,000 Irish people watched on in pride knowing that she’s one of our own.

While off the pitch Megan Rapinoe was the star for her beef with Donald Trump, her purple hair, and her activism in promoting equal rights for both women and members of the LGBTQ+, for me Brazil’s Marta’s pleas to all those watching to keep the game going wasthe most inspiring thing. Marta was not too bothered about breaking all-time goalscoring records across the men and women’s game. Instead, she used her platform to promote the girls of today to be the heroes of tomorrow. “The women’s game depends on you to survive,” she said. “Cry in the beginning so you can smile in the end.”

Who knew that a baker’s dozen would have such an effect on women’s football? The USA put 13 goals past Thailand in their opener and thanks to some lively celebrations, the USA found themselves in an “Us v Them” all-out war. Many described them as arrogant, cocky and unsporting, and it was all generous banter until Alex Morgan mimed sipping a cup of tea after scoring against England and caused an outcry that had not been seen since 1776. Sure, the USA brought a new form of bravado to women’s sports, but it just further motivated them to show the world, in right back Ali Krieger’s words, that they are the best and second-best team in the world.

Speaking of Thailand, it has to be mentioned how amazing it was to have them in the competition. Sure, they conceded 19 goals in their group games, but for team benefactor Nualphan Lamsam, chief executive of one of Thailand’s major insurance companies, the taking part was what really mattered. Lamsam not only provides support and financing to the women’s national team, she’s the employer of the whole team, ensuring they have a stable income and time to train. She made sure the team were proud in defeat and thanked the few, which turned into many, who came out and supported them. So you can imagine her emotions, in another defeat, when Thailand’s captain, Kanjana Sung-Ngoen, burst down the right late on and scored a beauty of a goal.

There were so many stories and heroes that emerged from this World Cup, and although the end result was inevitable, things had not always looked that way, and the old lazy trope that is levelled at the women’s game that it’s not competitive looked outdated. Spain almost surprised the USA; the Dutch were nearly out before the tournament even started, and the Swedes were incredibly impressive in beating those who came before them . . . even in that unnecessary third-placed match against Phil Neville’s England.

But now, we must ask ourselves, what can we do to ensure that the momentum gathered does not come to a sudden halt? The whole thing must be shaken up from policy level all the way to grassroots. After this World Cup, it feels as if women in sport will no longer be a tagline, it will be the new norm for generations to come.

Mourinho says more than pride at stake as Spurs host Arsenal 22:30
Paul Boyle’s hat-trick helps Connacht past Benetton 22:06
Jones targeting final victory as a springboard to a better place 22:05
Fifa make no allowance for minors moving from Republic of Ireland to British clubs 19:40
Pride, passion and a bit of madness - football runs through Cavan’s soul 20:25