Caoibhe Sloan: ‘I’ve been mistaken for a water girl a few times’ 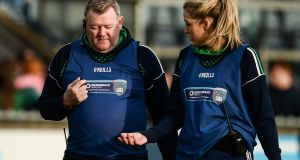 Shane O’Neills joint-managers Peter Lynch and Caoibhe Sloan in 2016. The pair are hoping to lead Down to success this year. Photograph: Sam Barnes/Sportsfile

“I’ve been mistaken for a water girl a few times, a player a lot of the time, even an injured player.”

Such is the plight of a young, female intercounty manager, though Caoibhe Sloan maintains things are moving on – even if it is, by all accounts, slow.

“No matter how many of us are walking along,” she says, “every single person goes to the man and says: ‘You must be the manager’.

“There are plenty of female coaches out there so I think it will be only a matter of time before girls do step up, the same as in soccer. There were two female managers in the World Cup final – it will be the same with our own game.”

Nevertheless, the joint-manager of the Down women’s football team is somewhat of a trailblazer in a milieu not only dominated by men but also coaches significantly older than her. As a 29-year-old secondary school teacher Sloan has found herself intertwined in the world of coaching much earlier than expected, not that it was a forced decision.

She thought she had “fallen out of love” with the game, only to discover that she had a different calling, a different imprint to make on Gaelic football.

It took only a short chat with Peter Lynch, Down’s other joint-manager, after returning home from a few years in London for Sloan to dive back into her old habitat in the vastly different role.

“We were in Clonliffe House before the All-Ireland final,” she recalls. “Me and my father go down every year and I was just chatting and talking about different things with Peter.

“We were talking about the shoulda, woulda, couldas of a game that had just passed and he was asking about what sort of drills I would do.

“And he was saying: ‘I cannot believe someone so young would have a football brain like this. Would you be interested in helping out?

With that, Sloan was back involved, running the sideline as Lynch’s equal with Shane O’Neill’s GAC.

Success soon followed, leading the duo to their current roles with Down.

I know so many players that played at such high levels – they were class footballers and they’re out of it now. They have so much to offer the game

“Talk about empowering females and all that, Peter doesn’t see a gender. He sees who is best for the role.

“He just lifts you up, builds you up and pushes you to be the best you can be. That’s with me as well.

“We’re texting all the time. We’re in contact more than is probably healthy. We’ll never make a decision without asking: ‘What do you think is best?’

“Ultimately we both want Down ladies’ football to succeed.”

This is only the latest instalment in Sloan’s story, the rebound perhaps.

Like any youngster she grew up with dreams of playing rather than coaching, but as unwelcome realisations dawned on her she slowly drifted away from the game that had played such an integral part in her upbringing.

There were obstacles that stood in the way of a playing career.

“I played for Ivy Bosco, but the club itself closed down and amalgamated with Bosco, a south Down team. Once it came to that I was going to a new club and another new club and then I went over to London for a while to do teaching.

“When I came back I wasn’t the same player. My younger sister was able to skin me. I definitely didn’t love the game as much as I thought I would.

“I’ve always been involved in coaching in some way. I’m a teacher so it’s kind of natural.”

As for the secret of transferring from a playing to a coaching career so successfully?

Without the psychological baggage?

And without the regrets and ruminations?

“I never really hung up the boots really. I never made a conscious decision. I just sort of moved into management; it was very natural.

“I was like: ‘I love this, I want to keep doing this.’ There are so many ways in our sport for girls to get involved. If you do step back at all you’re so far off the pace. I know so many players that played at such high levels – they were class footballers and they’re out of it now. They have so much to offer the game.”

But Sloan is in the circle and, already, the managerial CV is lengthening. Along with Lynch she led Shane O’Neill’s to the brink of All-Ireland glory in 2016 only to lose out by two points – a result that, she’s willing to admit, is “probably still not sitting well”.

Those successes came in the months following the chat in the Ballybough pub, just around the corner from one fabled sporting arena.

It’s strange how life unfolds: just a few short years on and they’re hoping to bring the Mourne County back to Croke Park for the record-breaking September showpiece.

It’s a tall order for a management team in their first year, with so many inexperienced players in the panel to boot. This year, however, starting with Saturday’s All-Ireland intermediate championship tie with Sligo, is just the beginning of the project.

“We’re pushing for everyone to be the best they can be. We’re not naive at all. We know that we’re a young team and have something like 19 new players – the turnover is unbelievable.

“We’ve asked the girls to buy into our project. Thankfully they have so far but it’s a project and a journey.”

For all the inexperience within the Down ranks, Sloan believes having a woman on the management team can be an advantage, one other teams appear slow to embrace.

“I coached my sister before and I kind of got vibes from her, vibes that I’d relay to Peter then – this is how something is going.

“Very simple things that I have seen managers do to me and do to other girls can completely crush a girl in ways that it would spur a boy on.

“Sometimes you can see managers who jump over straight from the men’s game who maybe don’t really know how to approach things.

“You operate differently. To a certain extent we’re putting in the exact same effort but maybe it’s being a bit more tactile.

“So it’s been brilliant. It’s so rewarding. It’s as good as playing right now for me.”