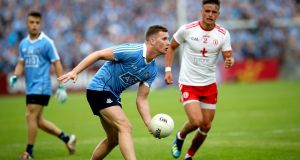 Tyrone must force Dublin to do what they don’t do - take risks - in Sunday’s All-Ireland final. This week’s GAA Statistics column explains how Dublin have a Championship average of 55 per cent possession and no Dublin footballer has taken a shot from play from the opposition 45 metre line or outside of it in their seven matches. “That collective focus, patience and awareness separates them from the chasing pack.”

In what was only his ninth match since returning from hip surgery, Andy Murray went toe-to-toe with 31st seed Fernando Verdasco in blisteringly hot conditions during the second round of the US Open, but came out second best 7-5 2-6 6-4 6-4. Despite his battling performance Murray was left fuming, claiming he saw Verdasco talking to his coach during a 10-minute heat-relief break, in violation of the hastily-implemented rule, an accusation the Spaniard flatly denied. Meanwhile Serena and Venus Williams will go head-to-head for the 30th time on Friday after booking their spots in the third round of the US Open.

1 Corona beer firm reeling after 8% slide due to coronavirus
2 Coronavirus: One case confirmed in Northern Ireland
3 Orange weather alert issued as Storm Jorge set to batter Ireland
4 Coronavirus: reinfection discovery may be blow to vaccine hopes
5 Clonlara case study: ‘Who the hell gave planning down here, day one?’
6 Predictions of ‘skin and hair flying’ as FG selects 13 of up to 60 Seanad hopefuls
7 Life as a Facebook moderator: ‘People are awful. This is what my job has taught me’
8 ‘I woke up the next day in a guy’s house covered in bruises’
9 Both sides in talks on Britain’s future relationship with EU expect early bust-up
10 WHO warns against ‘fatal’ complacency in global coronavirus fight
11 How well paid do you think you are? Here’s how to work it out
12 What should you do if you think you might have coronavirus?
13 ‘Our Irish breakfast here isn’t quite as good as my mammy’s at home’
14 What is coronavirus and what should I do if I have symptoms?
15 Cork grandmother goes on trial for felling Sitka spruce trees
16 What’s so funny about philosophers?
17 Coronavirus: What we know so far about how Ireland is affected
18 iPad use in schools is ‘distracting’ and leads to shopping and gaming, report finds
19 State would need 16 fighter jets for full air defence capability, expert says
20 We bought the house. Then its value plunged by almost €200,000
21 Newton Emerson: Letting IRA exist just enough to not exist taints politics
22 5,000 people from 135 countries to become Irish citizens next week
23 Why Cork GAA is wrong to wrap €70 jersey around War of Independence
24 Anne Harris: Sinn Féin has a real problem with contrition
25 Army reservists not fit enough for exercises, says general
26 Coronavirus: ‘Viruses don’t recognise boundaries or borders’
27 Wall Street hammered on coronavirus fears while Dublin dips 4%
28 Sealing the deal: how to buy a house at the right price
29 UK says it could abandon Brexit trade talks in June
30 Horse owners embarrassed ‘perfectly good’ stallion sent for slaughter, court told
31 Why you can’t publish a Weinstein #MeToo story in Ireland
32 Private nursing homes claim ‘discrimination’ in operation of Fair Deal
33 Coronavirus: Ireland plans for massive increase in tests
34 Want to protect yourself from coronavirus? Then wash your hands
35 Couple challenge decision over access to Killarney lake
36 Soreness is good, scales are pointless: The 10 biggest myths in fitness
37 Fear and solidarity drives wearing of surgical masks in Japan
38 Dave Hannigan: Tyson Fury, Trump’s perfect heavyweight champion
39 Number of people homeless rises sharply to top 10,270
40 2020 International Booker Prize longlist revealed
Real news has value SUBSCRIBE