Sonia O’Sullivan: Why can’t men and women just ride along? 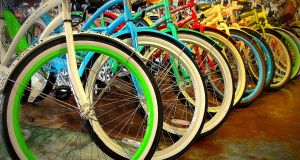 I get the sense the men don’t like being passed by a woman. As soon as I go past, it’s as if they wake up, race past, only to be passed again on the next hill.

What do you see looking out the window of an aeroplane when coming in to land?

The thing that stands out for me is the red of a running track. Like a bright light, shining up at me. And then I try to work out which track it is and see if anyone is running around. Some things never change.

I didn’t realise most people don’t see these tracks at all. Some see swimming pools, or tennis courts, or who knows what else.

It’s interesting how we can often think the thoughts in our own heads are similar to those of other people around us. If you’re in a group, all doing similar activities, the reactions and responses can vary so much. Rarely do we stop and compare and communicate what we’re thinking or feeling.

It sometimes happens out running but I think is magnified when out cycling, like when I randomly cross paths with other cyclist. Or even when setting out with a group of cyclists.

Like last Saturday morning, back in Melbourne in an autumn though still feeling like summertime, I mapped out a couple of hours where I could escape on the bike. As much as an hour of daily activity is my basic motto, when it comes to the bike, an hour is simply not enough, two hours will suffice at a good pace, three hours or longer even better when really putting in the miles.

I went out my own so decided to head to Kew Boulevard, a well known cycling spot in Melbourne, not much traffic around an undulating 12km loop overlooking the city.

It’s not the most interesting cycle, but you can always get a good workout in, get the heart rate up. I like to think of the Boulevard circuit as an outdoor version of staying indoors on the turbo trainer, something I have not given in to yet. If I cycle from home, two laps around and back, it’s just less than two hours, and it will feel like a good workout.

It’s fairly gender balanced too, although predominantly male cyclists lapping around. This is where the mind games, that interpretation, and the perspective, all come in to play.

I try to ride around at a good pace, push it up the hills, so invariably I tend to catch riders and go past. Then, when you settle down, you get passed again. And then you pass again. This can go on three or four times before a word is spoken.

I wonder is it just me? Or is the competitive drive awoken in both cyclists, and what is it that sparks the mini competition?

Because I also get the sense the men don’t like being passed by a woman. As soon as I go past, it’s as if they wake up, race past, only to be passed again on the next hill. And on and on this goes.

Do men really think that? I don’t know. And I don’t know if it’s just me or this happens to all women cyclists out there, but I’m sure if there were a few words spoken we could help each other and all have a better ride.

This may also be entirely a creation in my own mind. Either way, I use the challenge as a way to get a better workout. It helps the physical challenge become mental too, until someone gives up, or the silence is broken.

Cycling is different to running like that. You can turn up on your bike and join a group cycle even if you haven’t been on the bike for weeks. It will eventually get hard, but for the most part it’s enjoyable, and you’ll have gained confidence and fitness on the way and turn up in better shape for the next ride.

You can’t do the same with running. Show up for a group run having done nothing for a few weeks and you won’t last 10 minutes. You come home devastated, feeling worse than before you started.

At home, last month, I had one cycle in Cork, then my 50kms on Saturday around the Boulevard, which meant I could count on two fingers my number of cycles in the last few weeks.

Feeling properly motivated, I went out again on Monday, a Bank Holiday in Melbourne, this time joining up with the local cycling group. They had a long ride posted up, a nice route that wouldn’t be so attractive on a working day, but more fun with less traffic on the roads.

We set off at 7am, not too early by Melbourne standards, and even if I wasn’t too familiar with the route, knew it would all be worthwhile, once free of the traffic lights and out on the country roads and undulating hills.

We got rolling and then the mind games soon started up. I kept trying to place myself in the middle, sandwiched in between the men. Then I’d start counting, and continually find myself sliding back through the riders, needing a partner to help me hold my position and get carried along.

Instead I kept finding myself hanging on to the last wheel. Then the elastic would stretch, as the men raced up the hills, until it snapped. Then we would all regroup at the next intersection, and the race would start again.

By the end of 108kms, around 2,000m of climbing, the body was fully depleted, the other thing about being out of practice like that is forgetting how much fuel you need on the bike. Lesson learned again: always bring more food than you think you’ll need.

And maybe more than running, cycling is one of those rare sports where men and women can share the road, ride along together, maybe even compete, if that’s where your mind takes you.