Sonia O’Sullivan: Much to be said for living in the moment

'It’s good to enjoy the fast hours, but also good to appreciate what you have now' 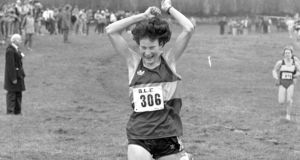 Someone showed me a photograph this week, which straightaway took me back in time, and also made me wonder where the time is going. And it’s not all about spending more time looking at our phones.

It was a picture of me winning the National Cross Country Championships, in a muddy field in Killenaule in Co Tipperary, throwing my arms over my head in an awkwardly innocent victory salute, wearing the black and yellow-stripped running vest of Ballymore Cobh.

It was March 1987, 30 years ago already, and it was my first Irish senior title. I was 17 years old. It was probably the most surprising win of the day, not just to those watching around the course and even on TV, but especially myself.

I wasn’t even supposed to be running. Just two weeks before, I had won the Irish junior cross country title, my main goal at the time, and only decided to run the senior championships because someone told me that Anita Philpott was running. Anita, who ran for North Cork AC, was my big junior rival, and I didn’t want to miss the opportunity or the challenge of trying to beat her.

I was also excited to race against the senior women, over a far longer distance than I’d ever raced before. So we headed for Killenaule and my Dad paid the £20 late-entry fee.

These days, I’d probably be told I was too young, not ready for the challenge. For me, winning that race, beating all the senior women of the time, helped announce my arrival, and that one day I was going to run in the Olympics. Which is exactly what I told RTÉ afterwards in my first TV interview.

The cross country season has shortened a lot in recent times. Athletics is now more focussed on the indoor season, and we’ve now got two indoor running tracks to prove it. Just like 50-metre swimming pools, that were once only an aspiration, we now have all the modern facilities to grab the attention on the Irish athletics scene. Clean, dry and warm – and a world away from the challenges of cross country running.

I know that traditionalists – and I am one – will always try to hang on to the good old days. Not because we didn’t have smartphones, but because we believed we were tougher, battling all sorts of conditions, whether it was the snow and wind and rain, or the unpredictable underfoot conditions of the farmer’s field. But are we allowing our younger athletes to get soft?

The World Cross Country takes place in Uganda later this month. What an adventure it would be to go there, although for the second consecutive edition of these championships, there will be no Irish athletes competing.

I’ve always been a firm believer in the benefits of cross country running, no matter what age, so it is disappointing that we don’t have any athletes competing, or that no Irish athletes seem to even want to go to the World Cross Country.

This does differ a little from the indoor scene, where 17-year-old Ciara Neville, from Emerald AC in Limerick, recently won her first senior title in the 60m, and will compete this weekend at the European Indoors in Belgrade. Some people might say she’s too young, but the experience can only stand to her.

It is never easy to predict the future for young athletes, and that bridge from 17 to around 21 can be a rocky road, with many ups and downs. It takes a lot of persistence and determination to reach international level, and to be competitive on the world stage probably takes about seven years. Looking ahead, it seems such a long time, but when you get there, and look back, you often wonder how the years went by so quickly.

There is evidence of that in every sport. I know from my time at Villanova, my first two years were fraught with ups and downs, those hours spent in the swimming pool, recovering from injury, were the longest hours of each day. Eventually, I rode through the storm, the pace picked up, and I grabbed every opportunity that came my way, especially opportunities I thought might never come again. Strike while the iron is hot, as Marcus O’Sullivan used to say.

Later in my career, I felt that way too, trying to lift myself back from that devastating exit from the Atlanta Olympics. Part of that process was learning to appreciate what I had taken for granted for so many years. Suddenly, what once came easy, felt a lot more difficult.

It was more than just being physically fit and ready: my mind was also questioning if I could still compete with the best runners in the world. I was training as well as ever, but every time I stood on the start line I was asking myself a question I wasn’t sure I had the answer to.

Some results gave me hope, others questioned my very being as an athlete. Like the 1997 World Cross Country, staged on a specially laid grass park in central Turin. I finished ninth, Catherina McKiernan was seventh, and the Irish team picked up the bronze medal. A great result, and what we would do to repeat it 20 years later, yet I was disappointed. It still wasn’t at the level I was used to.

Two weeks earlier, at the World Indoors in Paris, I finished second, in what was my first indoor race since my Villanova days, but annoyed after I’d run wide coming off the final bend, allowing for Gabriela Szabo to slip through on my inside for gold. Again, my old lofty standards felt out of reach, not realising at the time that sometimes you have to lower the bar to satisfy the mind, allow yourself to appreciate what you have, then build on this to the next level.

It still seems natural to aim for the best possible scenario, where you want to be, rather than where you are currently at. For the young athlete, sometimes the expectations can be elevated to a higher level than they’re ready for, and they can be left disappointed, but as long as they’re progressing at a steady pace, this should be encouraged.

Time is not consistently measured throughout our lives. I was reminded of that last weekend at a music concert in St Fin Barre’s Cathedral in Cork. When you are young, you try to compress time and squeeze as much in as possible. As you get older, you try to expand your activities to fill the time.

It’s good to enjoy the fast hours, but also good to appreciate what you have now, and enjoy the moment while you’re in it.

1 Gordon D'Arcy: I know what Joe and Cheika would do. Fix the basics
2 Darragh Ó Sé: Cork and Donegal went out with the wrong attitude
3 Can Solskjaer’s Man United find their groove when it matters?
4 Simon Easterby admits Ireland may need to take new line on maul
5 Lancaster says Ireland need to finish series on a high
Real news has value SUBSCRIBE
Here is your handy guide to sport on television this week