Shirley McCay looking to add to her mountain of caps 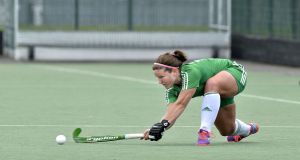 There are good grounds for the claim that Shirley McCay is the most capped female international player in team sport in Ireland.

It would seem astonishing if there is another player in the country, who has been playing at international level in their sport for 10 years, almost injury free, at the rate of 20 to 25 international matches a year.

That’s what the midfield player has managed as a pivotal figure in the Irish women’s hockey team. She has been playing there from the age of 18 and now 28-years-old, McCay has won an astonishing 231 caps for Ireland.

Her most recent cap was earned against Malaysia last month as Ireland swept the boards at their World League tournament and now step up to the second phase in the summer in South Africa, where the team hopes to earn a place in next year’s hockey World Cup in London.

Not unlike Irish rugby’s Jamie Heaslip, she has been able to escape serious injury. While Irish captain Megan Frazer continues to recover from surgery last year, McCay has had nothing more than a broken finger, stitches and bruised knuckles during her 10-year spell.

“I’ve been really lucky,” she says. “I broke my finger last year, just before a tournament in Hawks Bay (New Zealand). I did it in a practise game. That’s the only injury I’ve had. I’ve always been lucky. I’ve always been blessed with a sturdy enough body that stays injury free.

“You have to be pretty robust and be able to sustain that at club and international level. It’s not just a case of playing and being able to recover. There is always work and other aspects of your life getting in the way. I’ve been lucky so far.”

Even factoring in hockey’s modern format of having rolling substitutions so that players can rotate during matches and take breaks, the number is still enormous.

Irish men’s player Ronan Gormley hit the 250 mark during Ireland’s recent training spell in Spain where the team played the hosts and France. That was a new high mark for men and Gormley is still playing. But so too is McCay, who hopes to continue until at least the summer of 2018.

Her appetite remains sharp but if Ireland qualify for the London World Cup in July 2018, she would see that as a good time to stop. But she also cautions “never say never”.

An Olympic Games would be an obvious career highlight in 2020 but McCay has already been through three qualifying campaigns with the last few coming down to a final match and ending in agony for the Irish players.

“I wouldn’t look too far ahead,” says the current talent coach for Ulster Hockey. “We are looking towards this year, which will be busy. If we can perform come World League then there’s a World Cup place for us next year.

“When I didn’t reach Rio, it was my third Olympic qualifier that I’d had a fall at the final hurdle so . . . it was a massive disappointment and having done it twice before Rio I’m not really looking at Tokyo at the minute. It’s one step at a time and see how it goes. We will hopefully go to the World Cup next year.

“I guess that, apart from the Olympics, the World Cup has always been the pinnacle of a hockey player’s career. This squad is good enough to do that and for me it would be amazing to qualify for the World Cup in London next summer, the men’s and women’s tournaments together.

“I’ve given a huge amount of commitment to playing for Ireland. If we did go out on that high and experience a World Cup . . . never say never but I’m getting on a bit. I’m 28 now. That would be a really special way to finish my career.”

Between then and now there are plenty more matches and the 231 number is likely to crank up even more. Whether McCay is actually the most capped female in Irish team sports is difficult to call.

In cricket, a sport where large numbers are possible, Ireland’s Clare Shillington reached 163 caps and she is still playing, although now only in T20 internationals. Her current tally came over a 20-year stretch.

Women’s Rugby has not been around long enough at international level to generate such numbers. It is also a game of attrition with bodies unlikely to last for such an extended time. Nor does the Irish team play in an average of over 20 international games a year.

In women’s soccer, there are no Irish names included in Fifa’s list of players with 100 caps or more. But even McCay has some distance to go to match USA striker Abby Wambach’s 256 caps, although, that number is within reach.

“I think I’m the most capped female in team sport,” she says. “I’m very proud of what I have achieved. But it’s important to stay humble as well . . . yeah.

“I’m incredibly competitive. I’m laid back off the pitch and once I cross the line I suppose I become a different animal. It’s that competitive drive within in me.”

Johannesburg in July is the next phase of World Cup qualification with the top eight going through to the 16-team World Cup finals in London. At the current yearly average, McCay can expect to add at least 20 more caps to her current total, taking her tally to the magical 250 mark.

“If I’m adding benefit and bringing something to the team I am privileged to play.”