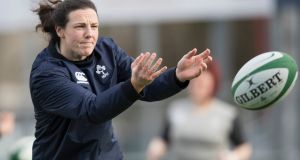 It was earlier this week that former Ireland captain Fiona Coghlan, in a panel discussion at the launch of #SupportHerSport, reflected on the progress made by the national team in recent years, from being Six Nations also-rans to winning the Grand Slam in 2013 – having never finished higher than third until then – and winning the title again in 2015.

It’s a measure of the standards the team has now set itself that, having reached those heights, there’s no great satisfaction with their 2017 Six Nations campaign so far, despite them winning all three of their games.

Those victories have left them level on points at the top of the table with England, who they play on St Patrick’s Day in a potential Grand Slam-decider – but only if Ireland can first beat Wales in Cardiff on Saturday. And having lost to the Welsh in a warm-up game in January, admittedly with seven uncapped players in the squad, victory in Cardiff won’t be viewed as a given.

Results wise, then, it’s been a perfect start to the campaign, but the performances have been anything but convincing, a last-minute Jenny Murphy try needed to scrape past Scotland, a desperately poor first half away to Italy rescued by four second-half tries, and unforced errors again a feature in their 13-10 win over France in Donnybrook, the wintry conditions hardly helping.

But as the old chestnut goes, if you can keep on winning without being at your best, grinding out results to keep you in the Grand Slam hunt, then there’s plenty of room for optimism if the performance levels can be lifted.

The very point was made by the Irish number eight Fitzpatrick, the 31-year-old Dubliner who has stepped in to Niamh Briggs’s captaincy shoes. If you can eke out wins “even playing below your standards”, she said, then “that’s a huge thing”.

And it’s not as if Ireland haven’t been without their problems in this campaign, the absence of Briggs with a hamstring problem a significant blow, as was former World Player of the Year nominee Sophie Spence not starting a game until the meeting with France following concussion problems.

And there was the much-discussed unavailability for that game of Sene Naoupu, Ali Miller and Hannah Tyrrell who were heading to Las Vegas for Sevens duty.

Considering all those factors, then, as well as an improved performance against the French – the pack, with Spence back on board, is looking more like the cohesive unit of earlier campaigns – the team can go in to those Welsh and English games with greater confidence.

Beyond that, of course, it will be a momentous year for women’s rugby in Ireland with Dublin and Belfast hosting the World Cup. There would be no bigger morale-booster ahead of that challenge than Six Nations’ success. Under the leadership of Fitzpatrick, then, that’s the target over the next fortnight.

December: Leanne Kiernan (Soccer). The Cavan teenager had an exceptional 12 months on the club and international front, excelling for the Irish under-17s and 19s before making her debut at senior level, marking it by scoring and collecting the player of the match award. She helped Shelbourne to a league and cup double, scoring a hat-trick in the FAI Cup final, and won the FAI Young Player of the Year award.