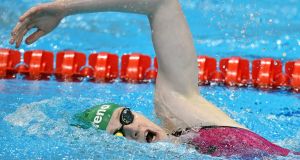 Danielle Hill in action during 200m backstroke heats at the European Championships at London Aquatics Centre in 2016. Photograph: Inpho

Like most people, Danielle Hill started swimming for purely recreational purposes. Her mother Caroline, who can’t swim to save her life, was worried about her children being around water while on holiday, and figured the least they should learn is how to stay afloat.

What neither of them imagined is that Hill would learn to swim with such irrepressible pace she’s now Ireland’s fastest ever woman in the water – breaking the national 50 metres freestyle record earlier this month, aged only 17.

It is the direct equivalent to the 100m sprint on the track, and Hill also broke one of swimming’s defining barriers: her time of 25.94 is Ireland’s first sub-26 second clocking, eclipsing the previous record of 26.02 which had stood to fellow Belfast swimmer Julie Douglas since 2002 (or about as long as Hill has been alive). There is also, it seems, ample room to go faster still.

Because just like the 100m on the track, there is more to the 50m freestyle than simply sprinting flat out: tactics actually play a vital role, especially at the start, and technique is critical too, such as in the short breathing patterns that can maximise aerobic delivery.

“Three breaths would be normal enough,” she says. “The men take maybe one or two, or sometimes none. But they’d be a lot bigger, with bigger power and lung capacity. For women, it’s normally two or three.

“Right now I’m trying get down to two breaths, but you don’t know. If that means me swimming slower, I might go back up to three, work on generating more speed with each stroke. But right now I take the first breath at halfway, and then 10m later, at 35m, then one again at 7.5 metres before the wall, then head down until the finish. I’m also up to 10 kicks, instead of nine, so there is always a load to work on.”

Hill is telling me this with an air of maturity beyond her 17 years. When she first took those swimming lessons in Belfast, aged six, there was no great ambition beyond learning to stay afloat; the family have since moved closer to Larne, to help ensure better coaching, and while she may have surprised some people at how fast she’s progressing up through the ranks of Irish swimming, she’s also perfectly clear on how she wants to further progress, up to and including the Tokyo Olympics.

She hasn’t come this far without plenty of hard work either: Hill is in the pool with the Larne Swimming Club nine times a week – every morning, and twice on a Wednesday and Friday. Her mother and father, David, are naturally supportive, despite their lack of any swimming background (her father was a competitive runner), although even at the best of times swimming can be a lonely sport, given those cold early morning starts and countless number of hours face down in the water.

“Swimming has to be fun, and it is fun to an extent. But past that, it’s your choice whether you want to go further. I think now I’m getting to the stage where maybe ‘fun’ isn’t the word to be using.

“The training isn’t fun. The training is grim, but I honestly don’t mind if I’m getting results likes this. That’s my enjoyment. And I love the challenge, my coach giving me different stuff to work on.”

Indeed her coach at Larne, Peter Hill, was quietly confident the record would fall going into the Dave McCullagh/Swim Ulster International, in Bangor, on February 5th: she swam both the 50m freestyle and 50m backstroke, but having clocked 26.08 last year, breaking the Irish junior record, that title of Ireland’s fastest women’s swimmer was always in the back of her mind.

“As soon as I saw the time, I did get a bit emotional. My dad was doing time keeping, in lane two. I was in lane five, and when I walked past him he was in tears. It’s a bit mad, really, although my coach was actually expecting it, and thinks there is more to come.

“My parents have been very supportive as well, 110 per cent. My dad keeps telling me my start is horrendous, and I think maybe the competitive side came from him. Sometimes that gets annoying, but sure why would he be your dad if he wasn’t a bit annoying?”

Hill has also committed to Swim Ireland – who have “backed me full time, for my career, so there’s no point going somewhere where I probably wouldn’t be wanted as much” – and she’s already laid down a plan to get her to Tokyo in 2020: she hopes to swim for Northern Ireland in the Commonwealth Games in Australia next year, and after finishing school in May 2018, will likely defer full-time study in order to focus of making it to Tokyo.

Now may not be a great time to be championing the merits of the Olympics, although Hills offers some salvation: “Watching Rio, last summer, the times they were doing weren’t miles off what I could be doing in three or four years’ time, and that’s quite exciting.

“Every athlete still aims to be at the Olympics. Maybe not at age seven, eight, but since I’ve been swimming competitively, since age 11 or 12, the Olympics have been one of my main target and ambitions, so most definitely I still hold then in high regard.”

Her next target is the Irish Open championships, staged at the National Aquatic Centre, on April 6-9th, Ireland’s fastest female swimmer perfectly poised it seems to go even faster.