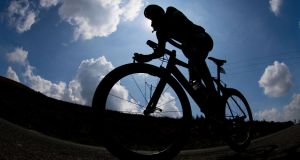 “And that is the magic of cycling: the simple forward motion from the power in your legs treats you to great bursts of freedom.” Photograph: Morgan Treacy/INPHO

Thursday morning broke evenly bleak, the sky not sure whether to laugh or cry, so it cried. It takes a little introspection to get out on the bike in this weather, especially knowing that five minutes into Glencree that sky will be shooting small chips of ice into your face. And the cruellest month has yet to come.

Every little conflicting reason counts. It often begins with The Rider, by Tim Krabbé, which like On the Road and The Great Gatsby, is best read in a slow and continuous loop. To the last word it’s the perfect paean to all the pain and pleasure and the fellowship of the road bike.

From the opening paragraph, where Krabbé looks at the non-riders around him – “the emptiness of those lives shocks me” – it is by turns of the page subjectively arrogant and despairingly real. It was written in 1978, and reads even louder today.

“The greater the suffering, the greater the pleasure. That is nature’s payback to riders for the homage they pay her by suffering. Velvet pillows, safari parks, sunglasses; people have become woolly mice. Instead of expressing their gratitude for the rain by getting wet, people walk around with umbrellas. Nature is an old lady with few friends these days, and those who wish to make use of her charms, she rewards passionately.”

Cycling on the open road doesn’t just bring you closer to these elements, it brings you within them. In a conversation with Paul Rouse from UCD on Newstalk radio last Sunday, we touched on the essential merits of sport itself, whether it was still inherently good for us.

Those pictures out of Rio this week, or the latest McGregor-Mayweather charade, may suggest otherwise, and competitive cycling still carries a myriad of self-inflicted wounds. Still, there is some great power about being out on the road bike, even for those of us who wouldn’t consider it our own sport.

It has its own gentle rush and slow thrill, and should not be an inherently dangerous sport, although is naturally not without inherent dangers. Nowhere is the triumph or tragedy of road cycling better illuminated than in the life of Fausto Coppi, voted the most popular Italian sportsman of the 20th century, the first man to win the Tour de France and the Giro d’Italia in the same year.

In Fallen Angel, the 2009 biography by William Fotheringham, Coppi, the original campionissimo, faces repeated moments of introspection: in 1951, two years after his first double triumph, he was riding the one-day Giro di Piedmonte along with his older brother Serse, his team mate at Bianchi.

Towards the end of the race Serse crashed near the Turin velodrome, skidding across the road and banging his head on the pavement. He got back on his bike and rode to the finish. That evening, after complaining of a headache, Coppi took him to hospital, where his brother died of a cerebral haemorrhage. Four days later, Coppi was back on his bike riding the Tour de France.

This is what cyclists do. In 1991, Sean Kelly was riding the Tour of Galicia when he got a phone call from home. His older brother Joe, who had first introduced Kelly to cycling as a youngster, had just completed a 100-mile charity cycle around Carrick-on-Suir when he was hit by a car and killed.

Kelly returned home for the funeral, and could hardly have made any less sense of it: he’d taken more risks, survived more near-misses than he could even remember, yet his brother just happened to be in the wrong place at the wrong time. Three days later Kelly was back on his bike, riding a criterium in Belgium, counting every little conflicting reason.  “Cycling is a living, breathing art,” wrote Laurent Fignon in his autobiography We Were Young and Carefree (originally published in French in 2009 as Nous étions jeunes et insouciants). Sporting books don’t come more philosophical than this, poignant too not just because Fignon is best remembered as the man who lost the closest Tour finish (in 1989, by eight seconds) as opposed to the man who won it twice (in 1983, and 1984); also because he died of cancer, in 2010, aged 50.

Fignon continued: “And that is the magic of cycling: the simple forward motion from the power in your legs treats you to great bursts of freedom. Your legs and nothing more. That’s the little miracle that is the bike, where man and machine conjoin. It’s a unique invention. The fusion of a man with himself.”

And, of course, a woman with herself. Part of cycling’s broadening appeal and this fellowship of the road bike is the indifference to men and women, even within the same group of riders. It’s what attracted Tonya McEvoy to the sport, just over a year ago, and within that short time cycling made as pleasurable an impression on her as she did her cycling colleagues at the Orwell Wheelers club in south Dublin.

Only last Sunday morning, on a club ride out by Maynooth, she was struck by a car travelling in the opposite direction, and pronounced dead on arrival at Naas General Hospital.

She was 34 years old, her funeral close to her home in Rathfarnham on Wednesday morning bearing all the conflicts of the pain her family were enduring at her loss and the pleasure which cycling had brought into her life.

That she died doing what she loved best is no conflicting reason to not show more fellowship to the road bike, especially those of us driving cars.