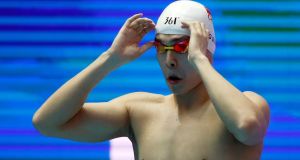 Sun Yang: last year was visited by drug testers in his home but he reportedly smashed his blood vials with a hammer, thereby refusing the test. Photograph: Stefan Wermuth/Reuters

It’s always interesting to note some of the contrast and disparity in the news headlines. and particularly the sports headlines, from when you board a plane on one side of the world until you disembark 24 hours later on the other side. It’s akin to landing upside down on another planet.

So last week, on my way to Dublin Airport for the flight to Melbourne, I dropped into The Irish Times office on Tara Street, where all the news and the talk was about Shane Lowry. It was as if the whole country couldn’t get enough of this positive good news story.

I stuffed a few sports sections into my bag, knowing there would be plenty time on the plane to read every single last detail about Lowry, and how he conquered Royal Portrush to pick up his first Major trophy. Not just any trophy but the oldest and most coveted Claret Jug from the British Open.

On arrival on the other side of the world I was curious of the impact of that victory in Australia, so my first stop was the local cafe. This was straight off the plane, the bus and then the train, to The Golden Child cafe for a longed-for coffee and breakfast to kick-start the day. After landing at 5am there were still a few hours before the morning dog walk.

Lowry had made a few headlines in Australia alright, only by then the sports pages had already moved on to a storm that was brewing on the pool deck at the World Swimming Championships in Gwangju, South Korea.

For a while this also seemed like a good news story, with lots of positive support surrounding Australia’s Olympic gold medallist Mack Horton, who had taken a stand in not sharing the medal podium with controversial Chinese swimmer Sun Yang, after finishing second to him in the 400m freestyle.

Sun is already a multiple Olympic and World Championship medallist but he also tested positive for a banned substance in 2014, trimetazidine, which he claimed he was taking for a heart condition.

The problem is that he had failed to apply for a Therapeutic Use Exemption (TUE), as the drug was only newly added to the prohibited substance list. As a result Sun was just banned for three months, as opposed to the four-year ban he could have faced.

This wasn’t the only reason for the recent stand-off by Horton which was then backed up by British Swimmer Duncan Scott, who also refused to share the podium with Sun after the 200m freestyle event.

Late last year Sun was visited by drug testers in his home but when he felt unsure about the protocol and identification of the testers he reportedly smashed his blood vials with a hammer, thereby refusing the test, which is also a punishable offence of up to four years.

The problem with that issue is the punishment hasn’t been decided yet; there is a Court of Arbitration (CAS) hearing in September. In the meantime Yang was allowed to swim at the World Championships, much to the obvious disgust of many of his fellow swimmers, who decided to protest and take matters into their own hands on the podium.

They actually received notice for their actions as well as a warning from FINA, the governing body of world swimming, who it seems had to be seen to stand behind their decision to let Yang compete at the World Championships in the first place.

That question of whether or not Sun should be allowed swim in the meantime also comes against the decision this week not to allow Caster Semenya to run, while she awaits a decision on her appeal to the Swiss Courts on the CAS decision in favour of the IAAF requiring athletes with differences in sexual development (DSD) to lower their testosterone through medication if they want to compete over races from 400m to the mile.

Back on the pool deck in Australia, meanwhile, there continued to be an overwhelming positive public support for Horton and Scott for their actions, even if some people were not reading beneath the headlines until a follow-up story a few days later.

With that came even larger headlines and the breaking news story that 20-year-old Australian swimmer Shayna Jack had been quietly sent home from the World Championships, before she even got near the pool.

The problem here is that Swimming Australia had been informed that Jack had returned a positive drug test for ligandrol, a new drug that operates along the lines of testosterone and anabolic steroids, originally developed for cancer treatment and other conditions of muscle wastage, but also beneficial in sports for the increase in repair and growth of muscle without any major fat or weight gain.

Just like that the shoe was on the other foot, and the negative side of sport took the headlines and filled the airwaves. How would Australia react this time, and everyone who had stood up and supported the podium stand-off just days before?

Straightaway Jack accepted the findings, putting out a statement denying that she knowingly took this drug into her system, and that potentially it might be the result of a contaminated supplement.

For a young 20-year-old athlete, really only starting out in her sport, part of you wanted to believe her story, because it is so easy to read the details and sympathise with her. This is the sometimes the biggest lesson, or warning, of all for athletes, to always know what you are ingesting. Particularly when it comes to supplements, knowing where they are manufactured and ensure that they are batch tested against any potential contamination.

It’s easy to forget these details when you just run for fun and fitness. Sometimes I will take an electrolyte drink or protein shake if I go for a long run or bike ride, to help speed up the recovery after a strong effort when you know you’ve depleted yourself and you are not yet ready for real food.

Without a second thought you rip open the sachet and shake up the drink, picked up at a local race, or maybe bought on a whim at the local health shop. It doesn’t matter too much if there is no fear of drug testers knocking on your door.

As a matter of interest I checked the details of one of my supplements online this week, to see how easy it is to confirm the safety and batch testing of products for athletes. You can simply download a traceable certificate of the product to ensure it has not been contaminated. When you see how easy this is to navigate on an amateur curious level, it’s hard to feel so sympathetic for any educated international athlete.

Then you think maybe we should read some more on the details of Sun. He comes across as brash and arrogant, yet full of self-belief. His coach is also Australian, which you think might be in his favour. Then along comes Jack, and her story is told over and over again with mostly innocent details that make you want to believe her.

What is certain is they’re both in the same murky water, and for all the advances in anti-doping our trust in sport is still far from clear.

1 Sideline Cut: Vignette shows why Bird is the true shark in The Last Dance
2 Farrell and O’Connell provide insight into changes in Ireland’s analysis
3 Coming fourth in the Olympics didn’t change this fearless quartet, time did
4 GAA preparing for earlier return to activity but pitches to remain closed
5 Liverpool and Everton to oppose plans to play games at neutral venues
Real news has value SUBSCRIBE