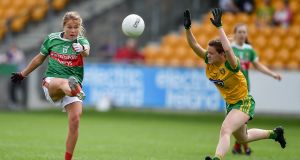 Sarah Rowe kicks a point despite the efforts of Donegal’s Niamh Carr during the clash at Bord Na Mona O’Connor Park in Tullamore, Offaly. Photo by Ben McShane/Sportsfile

Levante manager Paco Lopez once said about football: “We overdramatise it sometimes, but that’s why so, so many people love it”.

Trust me, ladies football is the overdramatic and pure football that you want, and you deserve. We have officially put behind a stellar round-robin stage to the ladies football championship. Three weeks of excitement, upsets and sensational scores finally painted the picture of the All-Ireland quarter-finals.

Last year’s semi-finalists, Donegal, were knocked out officially by Mayo while Armagh shocked fans by beating Cork to advance to the quarters. Alongside them are reigning All-Ireland champions Dublin, losing finalists Cork, Kerry, Tyrone, Waterford, Galway and Mayo.

We have all become familiar with the footballing pantomime that both Mayo football teams seem to live out annually, and we had to come to terms last year when Mayo were knocked out, they still managed to grab all the headlines for off the field events.

While many were wondering about the future of Mayo LGFA and were concerned over the handling of said events, once Peter Leahy had the other players strongly support him and row behind him, eventually, Mayo would return to the heights of success. The only question that remained was how long that would take?

With Sarah Rowe missing the league through AFLW duties, Leahy was able to tamper with a forward line that was also missing Carnacon stalwarts, and add his own style of play into it.

Take a look at the curious case of Rachel Kearns.

Kearns has been a goalkeeper, defender and now a significant threat in the forwards. In the 2018 league final against Dublin she played in goal, was then shoved out into defence where she made a name for herself in last year’s championship when she produced an outrageous block which denied Galway a clear goal.

In her first league game this year against Tipperary, Kearns moved to full-forward, where she scored 1-06 from play. She also is a talented soccer player with Galway, has featured underage for Ireland, and she has boxing medals to compliment her other achievements.

In the game against Donegal, Mayo knew they would have to contain the Ulster side’s lethal forward line, while also putting the onus on themselves to try and score as much as possible and whenever it was possible. Tactical flexibility and the ability to pass when it was on rather than forcing it, along with composure, were all key to Mayo’s success.

The Mayo full-forward line of Rachel Kearns, Sarah Rowe and Grace Kelly scored an impressive 1-20 between them, while curiously sharing free-taking duties, which they scored 11 points from. Admittedly, Mayo were a bit fortunate in that Donegal’s kickouts were incredibly hit and miss and Karen Guthrie had her third goal overturned after a square ball decision.

Mayo’s porous defence is something Leahy will have to address this week, and although he will say his team is in transition, in the modern game, defence is key to winning championships. Mayo have conceded six goals in two games and are wide open when teams drive at them. If the game turns into a shootout, teams facing Mayo will be confident that their defence won’t hold out.

While other groups proved to be precarious in terms of nailed on winners, the Dubs blew their competition out of the water. And not to go full anti-Dub on this occasion, but Dublin really have not had any major test. Despite losing Sinead Aherne to a shoulder injury for the two round-robin games, Dublin had no problems whatsoever.

Firstly, they beat Waterford by 18 points just under three weeks ago, and last weekend they absolutely smashed Monaghan by 25 points. In the game against Monaghan, they only conceded 4 points, with 50 per cent coming from play.

People can gloss over it and praise Dublin’s defence, but a quick glance to, locally, men’s football, and from a women’s sports point of view with Lyon and the USA shows what happens when disparities begin to crop up.

It’s undoubtedly not Mick Bohan or a Dublin problem, it is just a worrying trend in ladies football, considering the strides it has made to date.

Now, that the dust is settled and the nitty-gritty stages of the ladies football championship is about to begin, it is seriously heating up.

Cork must obviously bounce back and regroup from their weird defeat to Armagh, Dublin must keep the steamroller going, Kerry are on a good rebuilding level and what sort of drama will Mayo bring to the championship?

Can Armagh get two on the bounce and continue building momentum, can Galway continue their upward trend and lose their inconsistent tag.

Will Tyrone show why they deserve their place among the fatal four and are Waterford good enough to show their league title was not a once-off and they belong with the greats? Plenty of questions to be answered in the weeks ahead.