Dave Hannigan: Robbins and McGregor worshipping at the altar of a stagnant pool 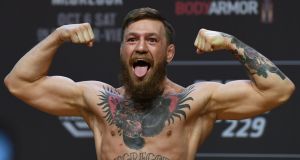 Conor McGregor: “I am an Irish animal, a proper Irish animal. My career is a career of never-been-done-befores. I opened up pathways for my people thanks to my belief and my hard work.” Photograph: Ethan Miller/Getty Images

Tony Robbins, a man who markets himself as America’s leading life coach, recently broadcast an episode of his podcast in which he interviewed Conor McGregor.

Befitting a pair of individuals renowned for preening self-regard, it was an astonishing 46-minute exercise in mutual admiration that, on occasion, veered perilously close to onanism. As is his default setting, Robbins appeared overly excited just to have garnered an audience with the mixed martial artist turned whiskey salesman.

And, even by his own lofty standards of self-aggrandisement and on brand-messaging, McGregor responded with a command performance of his trademark faux profundity and WWE script out-takes.

“I know who I am,” he said. “I am an Irish animal, a proper Irish animal. My career is a career of never-been-done-befores. I opened up pathways for my people thanks to my belief and my hard work.”

One minute he was waxing on about the sheepskin-clad claymore in his house that reminds him of the McGregor lineage fighting on battlefields throughout history, the next lauding his own achievement in surviving the killing fields of his Crumlin youth (he really should be dead you know).

Those who come to the production for the standard issue McGregor spiel, that tiresome amalgam of hoopla, hysteria and hogwash, will probably stay to laugh at the attempted aphorisms. Even if Robbins in his impressive ignorance tried to compare his guest to the three-time heavyweight champion of the world, Muhammad Ali he ain’t, Muhammad Ali he’ll never be. Witness these beauties.

“Wit beats toughness any day of the week and twice on Sundays!”

“Nothing external can defeat the internal!”

“If I have one limb that’s gone, I have another seven limbs!”

“I am an attacker and my attack defends!”

A couple of swell snake oil salesmen who have got rich exploiting the gullible and hoodwinking the naïve, this duo have more than a mutual relationship with the celebrity tailor David August in common.

McGregor’s most lucrative pay day came from using self-promotion and offensive patter to somehow convince enough millennial ingenues he was a credible boxer who might defeat a superannuated Floyd Mayweather.

Robbins has spent decades preying on a vulnerable demographic prone to believing all their problems can be solved by a 6ft 7in self-help guru with bleached teeth shouting at them, a tactic so successful he’s estimated to be worth half a billion.

Predictably then, an audience of Robbins and his chosen acolytes lapped up every bizarre McGregor non-sequitur (“In Dublin 12, we are known to dress well”).

The love went both ways. As so often when talking to people wealthier than him, the Dubliner appeared uncommonly deferential and, in one of many pandering exchanges, told Robbins: “You are a powerful man but you do not use your power to boss”. A strange statement given that Robbins offered a rather unique take on the MeToo movement last year.

“If you use the MeToo movement to try to get significance and certainty by attacking and destroying someone else, you haven’t grown an ounce,” he said to a crowd in San Jose, California who had paid hundreds of dollars for the privilege of hearing him utter this guff. “All you’ve done is basically use a drug called significance to make yourself feel good.”

That comment appears even more loaded given recent revelations.

“Two former followers who went on to work for Robbins provided BuzzFeed News with signed statements swearing under oath that they felt he had sexually harassed them by repeatedly pursuing them after they made clear they weren’t interested,” wrote Jane Bradley and Katie JM Baker, who conducted a lengthy investigation into McGregor’s new best friend earlier this year.

“Two more women who worked as his assistants said Robbins expected them to work alone with him when he was naked in his hotel room or in the shower. And another former employee said she was fired after having a consensual sexual relationship with Robbins.”

Robbins denied this slew of allegations but as far back as 2007, stories of this ilk have been doing the rounds. Aside from assembling affidavits, Buzzfeed unearthed transcripts of seminars where he berated women who confided in him about being victims of abuse.

“She’s f**king using all this stuff to try and control men and that is complete horseshit,” was Robbins’ response to one woman who had just shared with him and his audience her story of being raped.

“Does he put up with you when you’ve been a crazy bitch?” he asked another who had just told the story of her husband being physically violent to her.

In McGregor’s defence, the Buzzfeed story was published in May and his conversation with Robbins appears to have been recorded before that. However, rather than distance himself from the controversial figure, as a couple of corporations have done in the aftermath, the 30-year-old was very happy last week to share the podcast on social media.

Was he not aware of his new best friend’s travails? Did he not read the accounts of Robbins groping women at events and repeatedly using racial slurs? Or maybe he knew and wasn’t that bothered by that kind of stuff?

That’s one way of putting it.

1 Matt Williams: Six Nations must recognise the desire for revolution outside Europe
2 Sport crosses its fingers yet again as ministerial merry-go-round gets another spin
3 Monica Seles: The warrior queen who could have been the best ever
4 Aidan O’Brien targets historic eighth Epsom Derby win with strong hand
5 Michael Walker: Ian Baraclough staying on trend, from Sligo to Windsor Park
Real news has value SUBSCRIBE
Here is your handy guide to sport on television this week