Sonia O’Sullivan: Raising the limits of our own game

‘I wonder where amateur athletes get their professional levels of motivation’ 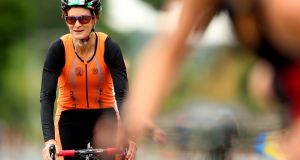 Sonia O’Sullivan: ‘I find myself trying to find ways to get better at swimming and cycling’. Photograph: James Crombie/Inpho

What better way to finish off the St Patrick’s Day weekend than waking up to the news that Ireland had beaten England in their last Six Nations game of the season.

I’ve gotten used to this by now, all the action and excitement taking place during the Australian night time, the result still giving that same thrill and satisfaction when reaching for the phone first thing in the morning. And not for first time, it seems, Ireland raising the limits of their own game when many people had considered the challenge of beating England to be beyond them. That’s the ultimate goal, no matter what the sport, or level of competition.

It topped off the already buoyant mood that seems to come with St Patrick’s Day all around the world. It used to be just about the parade, but it has now practically turned into a week of all things Irish, especially in Australia. I also get lots of messages from people in faraway places, including my good friend Trevor Vincent who was visiting the Solomon Islands and assured me he’d packed his green shirt, all ready for wearing on St Patrick’s Day.

I was out walking the dog early on the day itself and my neighbour stopped me and asked why I wasn’t wearing anything green. That’s how literal some people take it, when it didn’t even cross my mind that I should be wearing something green at that early hour. Later in the day, I assured him, at the Irish Chamber luncheon.

The rest of the weekend was spent out in “bush” as the Australians still like to call it, well away from all such things Irish. The plan was to join up for a few days cycling with a friend, Clare Dallat, who has set herself a seven-day cycling challenge to mark her 40th birthday. Or rather to ensure she doesn’t forget it.

She’ll be cycling up seven Victorian mountains, in seven days, covering 500km and around 9,000m of climbing. We started out from a rural school camp in Marysville, a lovely country town on the edge of the Yarra Ranges, northeast of Melbourne.

In some ways it reminded me of my own 40th birthday, when I had set myself my own target, although probably not as daunting as seven mountain climbs.  Back in 2009, approaching 40, I could feel myself slowing down, as you do. So I set myself the target of running 10km in under 40 minutes. Considering there was a time when I ran the same distance in closer to 30 minutes, this may not sound daunting at all. But at the time it involved some dedicated, specific training to ensure I met that target. I still like to try and beat my age each year for a 10km run, but the sub-40 minute target is a distant memory.

Still, part of that memory came back to mind this weekend, wondering why we set ourselves these physical targets and challenges and our need to rise our game to meet them. The question was asked of us within the opening kilometre of our first 15km. The weather forecast was looking ominous so there was only a short ride in before the climb, up to Mount Buller, one of the closest ski resorts to Melbourne. By the half-way point, well warmed up, it was time to rise to that challenge, out of the comfort zone, then the satisfaction of reaching the top, rewarded by a downhill ride in about a third of the time it took to get up.

In recent years more people have become engaged with fitness and health, setting themselves their own challenges like this. You can’t walk past a park without noticing groups of people of all ages being cajoled by a personal trainer or coach, pushing their bodies and raising their heart rates to help burn some energy and get the adrenalin buzz we all crave.

Sometimes I wonder where these essentially amateur athletes get their professional levels of motivation.

Although more is not always better, and the older I get the more I believe there are times when less is more, when we need to listen to our bodies. I definitely grew up in an era where more was always better: more miles and faster pace equals greater results.

It worked for a good few years but thinking back now I’m sure there were times, particularly later in my career, where I was probably training too hard, never matching the effort I was putting in on the training track at the races when it really mattered.

It’s one of the regrets I’ll always have, that I didn’t know there comes a time when less is more. I should have had more faith in all the miles I had banked down through the years, to really enjoy my last few seasons as a competitive athlete.

It’s taken some time, but I now realise that unless you’re training for the Olympics or world championships, it’s important to find the balance. There needs to be enough intensity so that you feel satisfied with your efforts, but not so much intensity that you stress the body, impact on the immune system and wear yourself down.

It’s mostly an individual thing, to find what works for you, and there needs to be variety that will keep you engaged and motivated. I know I can never match my running times of the past, they are so far out of reach, so for me the motivation to run hard and fast is gone. This is why I find myself trying to find ways to get better at swimming and cycling, not because I want to race triathlons, but because I can still feel I am making progress.

In that sense the fire is still burning, to set challenges that involve more than just plodding along, because the satisfaction you get from a hard workout can never be replaced by a walk in the park.

Running doesn’t allow that for me anymore which is why I don’t compete at any level and can only watch in wonder at events like the World Masters Championships taking place in Daegu, Korea this week.

Already Ireland has claimed 11 medals, including five gold medals, flying the flag for Irish athletics on the same weekend that the 42nd World Cross Country is taking place in Uganda, without a single Irish athlete taking part.

It’s disappointing to see an event where we have such a strong tradition, that I grew up watching as a young athlete one day dreaming of winning and eventually fulfilling that dream, has become irrelevant to current Irish athletes. As if the challenge of raising their game appears beyond them, without even taking it on.

1 The Offload: Ireland are stuck in no man’s land
2 Nicky English: Galway and Waterford face battles with fatigue in All-Ireland semis
3 Every kind of wind imaginable was against Tipperary football - and they came through
4 Davy Russell on neck injury: ‘it was a very close one and I dodged a bullet’
5 England’s ferocious defence sets them apart from the rest
Real news has value SUBSCRIBE
Here is your handy guide to sport on television this week