Worst sporting moment: No fairytale ending for Celtic as play-acting Porto pull through

Damian Cullen was among the 80,000 Celtic fans who descended on Seville in 2003 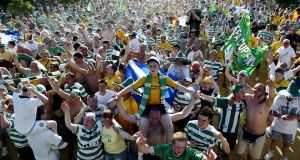 Celtic fans outside the Estadio Olimpico in Seville during the Uefa Cup final on May 21st, 2003. Photograph: Michael Steele/Getty Images

The wolf doesn’t eat Little Red Riding Hood. The giant doesn’t crush Jack. The princess doesn’t ultimately reject Aladdin. This is not the way fairytales are supposed to end.

Larsson was supposed to get the trophy.

I am not a sore loser.

It is important to point that out at the start, because much of what is below may strongly challenge that assertion. On second thoughts, maybe I shouldn’t have put that in your mind from the onset. Moaning after your team loses an important match is never a good look. Moaning 17 years later . . .

But it is not the loss. There’s no shame in a 3-2 defeat after extra-time in a Uefa Cup final to a hugely-talented side which would go on to claim the Champions League trophy the following season. But . . . the manner of the defeat – the cheating, diving, time-wasting, anti-climax, poor fare, errors. More errors. A lost opportunity.

The 2003 final in Seville between Martin O’Neill’s Celtic and José Mourinho’s Porto has achieved mythical status for several reasons – not least because Uefa described it as having “the largest travelling support to have assembled for a single game”.

Legend has it that half of Scotland and Ireland spent the third week of May that year in the south of Spain for Celtic’s meeting with Porto. The figure most seemed to have settled on – for no obvious reason – is that around 80,000 Celtic fans travelled. Most, of course, arrived in Seville without match tickets (the capacity for the 2003 Uefa Cup final at Estadio Olímpico de Sevilla was just 52,000). In the days before the game, Porto fans queued outside hotels selling tickets to Celtic supporters dreaming of glory – the going rate for a golden ticket being around €500.

The day before the game I went to the stadium by taxi. “We’re only 20 minutes from the ground,” I confidently told others staying in the hotel when I returned. The following afternoon, under a sweltering sun, and with traffic at a standstill, I walked for over two hours, along with tens of thousands of others, to the ground. In a rather different way, the walk back later that night was just as heated.

The number of tickets which changed hands caused a nightmare for the stadium officials on the evening of May 21st, 2003. In an effort to keep the fans separated, stewards reduced the allocated space for Porto fans several times in the hours before kick-off – until, eventually, they were largely in one section behind one end of the ground. Suddenly, it looked like a home game for Celtic.

The final was supposed to be a big statement for a club who were a big fish in a small domestic pool, and were regularly linked with a move to the English Premier League – where doubters laughed at the idea of Celtic competing with the big boys.

Despite five goals, the game did not match expectations – though it wasn’t for a lack of talent. Henrik Larsson and Chris Sutton were up front for Celtic, with Deco, Capucho and Derlei leading the attacking options for Porto.

From the start, the tension and anxiety in the stadium flowed down from the stands and infected the pitch, or perhaps it went in the other direction. Either way, it made for a tie riddled with with poor calls – from officials and players.

It stood in stark contrast to some of the flair and quality in the run-up to the final. After victories over clubs that included Blackburn Rovers, Celta Vigo and Stuttgart, Celtic faced a fancied Liverpool at the quarter-final stage.

A 1-1 draw (Larsson and Emile Heskey) at Celtic Park nicely set-up a second leg at Anfield, where Celtic handed Gérard Houllier’s side a 2-0 defeat thanks to a trademark Alan Thompson free-kick and a screamer from John Hartson.

The semi-final, against Boavista, provided the Scottish club with a taste of what was to come in the final. Porto’s cross-city rivals spent much of the game determined to win the free-count, if not the match. And it was a similar story in the decider, with Porto players hitting the deck at the slightest hint of a wave – albeit against a physically-imposing Celtic side.

More than a decade later, O’Neill still couldn’t resist reaching back to the night in the Andalusian capital, after Mourinho – during his second term at Chelsea – complained about time-wasting by opponents. “We had a great Celtic team [in 2003], but the players were cheated out of winning a Uefa Cup,” said the Derry man.

In the final, goals either side of half-time provided some cover from the poor fare – Derlei slotting home just before the break, with Larsson’s header restoring parity minutes after the restart to claim his 200th goal for Celtic. Five minutes later it was 2-1 to Porto, when Deco slipped a ball to Dmitri Alenichev. Briefly, the game had sprung to life, and three minutes later, it was level again when Larsson headed home a Thompson corner.

After that flurry of action, normality was restored – and, like some of the players on the field, the game effortlessly slipped into extra-time.

Not even the first outing of the silver goal rule – where if a team was winning at the end of the first half of extra-time, they would be declared the winner – could coax the best out of either side. The most notable action of that half was the dismissal of Celtic enforcer Bobo Baldé. Not entirely unconnected to that incident, the Porto winner eventually arrived in the 115th minute when Derlei reacted quickest to a Rab Douglas block.

The long, over-the-top celebrations didn’t help the mood in the stadium. “I thought they’d gone off into town to celebrate,” O’Neill said later.

There was time left for Porto goalkeeper Vítor Baía to pathetically roll and roll, clutching his leg, after a tame Ulrik Laursen challenge, and the game slowly petered out to the sound of jeers from the Celtic supporters – with Porto play-acting and time-wasting. Ugliness on the pitch met with ugliness off it. It didn’t reflect well on either side.

An exasperating and fitting end to a day that initially had promised so much.

1 America at Large: Golfers guilty of legitimising Trump’s toxic regime
2 Ireland, France or England? Who needs what to win the 2020 Six Nations
3 ‘This is not a personality contest’ - Jack Nicklaus endorses Donald Trump
4 Solskjær’s stock is on the rise again after clever squad rotation
5 Gael Fickou shifted to the wing as France name their XV
Real news has value SUBSCRIBE
Crossword Get access to over 6,000 interactive crosswords