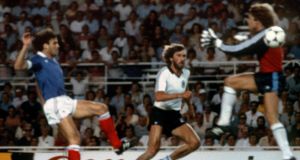 The thing about sport is that when you first become besotted with it as a chiseler, you’re under the mistaken impression that it’s life perfected, that its rules are enforced, thereby ensuring skulduggery will not be rewarded nor injustices allowed, and that the good guy always prevails.

It doesn’t take long for you to be dissuaded of this notion, probably around the time you stop teething, your innocence left shredded upon realising that sport is actually no different to life at all. It can be a bit unfair. And quite often, rules are not enforced and baddies do indeed prevail.

Perhaps the earliest actual experience of this was during a schools basketball match against a shower of behemoths from Kildare, the final score 105-3 to them, but only because they spent the entire contest pinging our bra straps.

Not once did the referee intervene despite the shrieks rising up from every patch of the court, in fact he used a time-out to compose himself after being overcome by the giggles. He even had the effrontery to say ‘hard luck’ at the end of game, at which point we would have pinged his jockstrap if he’d been wearing one.

It was on a sticky July night in Seville later that year, in the 1982 World Cup semi-final, that an injustice of an even greater magnitude, this time on the international sporting stage rather than in a hall in Kildare, was witnessed, West Germany the bra-pingers, France their victims.

Actually, it wasn’t an injustice at all, Germany just happened to score more goals in the penalty shoot-out that decided the game, and that’s allowed. And the only bra-pinger was their goalie, Harald Schumacher, although with his damaged vertebrae and lost teeth after being rendered unconscious by him, it’s likely that Patrick Battiston suffered somewhat more pain than that inflicted by the Lawless Lilywhites.

But even though the result wasn’t unjust, it was just sport, it felt like it was because this was a French team that made a whole heap of people of a certain vintage fall in love with football. And, so, you felt that the sporting Gods should have ordained that they beat West Germany, reach the final, and head for home with the World Cup in their luggage.

They didn’t, and close enough to four decades on, nothing has even come close in the crushing-sporting-disappointment department, their defeat in that shoot-out leaving many a heart in smithereens.

France were out. Sport proved to be capable of being as rubbish as life can often be

YouTube, bless it, is an essential tool if you’re starting to wonder if the story is growing in the telling. If Jean Tigana was as elegant and mesmeric as you remember. If Michel Platini made football look as easy as he did. If Alain Giresse - some of us thought his first name was actually Diminutive - found passes that geometrically should have been impossible. If they were all artists as much as footballers.

Some of them had unforgivable moustaches and hairdos the like of which we’ve only ever seen in Whitesnake, but, and this might not be regarded by aficionados as important, they sported a jersey that was such a work of art, a thing of sumptuous beauty, it should have given the team a two goal start against the Germans.

Mind you, when Giresse scored in extra-time, that put France two goals up (3-1), his celebration Marco Tardelli-esque because that, surely, had put them in to the final. But then Karl-Heinz Rummenigge and Klaus Fischer made it 3-3 and you cursed John Logie Baird for ever inventing the telly.

And then Schumacher, who should have been behind bars at that stage for poleaxing Battiston, saved twice in the shoot-out and all you could ask the sporting Gods was: ‘Are you having a laugh?’

Horst Hrubesch celebrated his winning penalty with a dance akin to something your Da might perform at a wedding when The Birdie Song comes on. France were out. Sport proved to be capable of being as rubbish as life can often be.

Because of the Schumacher/Battiston incident, which garnered the bulk of the post-match attention, history has often forgotten just how majestically thrilling a game it was, the players so weary after normal and extra time some of them could barely carry their legs to the spot to take their penalties.

Famously, Schumacher later beat Adolf Hitler in to second place in a French poll to find the most hated man in the world, an accolade the pantomime villain most probably cherished. A yarn did the rounds about him outing cigarettes on his arm to show his then girlfriend just how tough he was, how he felt no pain. And he wasn’t much in to remorse either. When informed that Battiston had lost a number of teeth after he crashed in to him, Schumacher replied: “If that’s all that’s wrong, tell him I’ll pay for the crowns.”

That he didn’t even get a yellow card, never mind life without parole, for the ‘challenge’, heightened the French sense of grievance, but Platini was stoic enough. He could have said “gutted”, but him being French: “That was my most beautiful game. What happened in those two hours encapsulated all the sentiments of life itself. No film or play could ever recapture so many contradictions and emotions. It was complete. So strong. It was fabulous.”

It was too, but 38 years on? Heart still in smithereens.