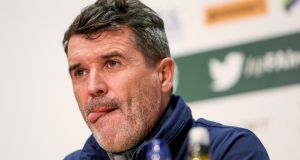 Roy Keane says that Ireland are focused only on Friday’s match against Moldova. Photograph: Inpho

Roy Keane has played down the significance of the fact that Gareth Bale has been ruled out of Wales’ games against Georgia and the Republic of Ireland, with the Corkman insisting that Martin O’Neill is also missing key options as he prepares for the closing two games of the World Cup qualifying campaign.

“He’s an important player for them but we are missing Seamus Coleman and Jonathan Walters, ” he said after training on Tuesday. “That’s part of the game.”

For Friday, Ireland are also missing James McClean and Robbie Brady, with both players suspended and Keane insists that getting through that game is the priority for now.

“We’re focused on the next match; we’re just trying to get our heads around that. So if you want to talk about the Wales game then you are talking to the wrong guy.”

Most of the players who are regarded as doubts for Moldova due to injuries made progress at training on Tuesday with all but Shane Long taking little or no part on the session. James McCarthy, he estimated, had done “about 70 per cent of what the other players had done. “We don’t want to overdo it,” said the assistant manager whose tone regarding Everton’s concern over the player was somewhat scathing, “but at some point you have to join in and ultimately you want to see him do something in 11 v 11 games.”

The former Manchester United star insists that morale within the group is high and that the new players, Aiden O’Brien and Scott Hogan, have been settling in well. “All is pretty upbeat, as you would expect,” he said.

Asked about Hogan suggesting that he had been slightly star struck to meet the Ireland assistant manager, having idolised him somewhat as a young United fan, Keane laughed the notion off. “A week working with me and he’ll soon change his tune,” said the 46 year-old. “That’s what most people say.”

Keane said that he was sorry to see Kevin Doyle retire from the game but said that the former Wolves striker appeared to have made the right decision given the health issues involved. He played down the idea that players needed to be afforded much better protection, however. “If you’re worried about the physical side of football,” he said, “then play chess.”