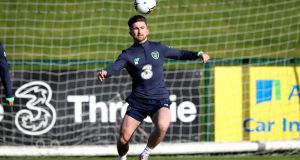 Sean Maguire during Ireland training ahead of the World Cup qualifiers against Moldova and Wales. Photo: Ryan Byrne/Inpho

Sean Maguire returns to the Aviva Stadium on Friday night with mixed memories of the national stadium – but with potentially the best night of his career so far awaiting him.

In 2015 Maguire was limited to the role of spectator in the FAI Cup final, failing to earn a place on the bench for Dundalk as they beat Cork City 1-0 in extra-time courtesy of a Richie Towell goal.

Last year however the tables were turned as Maguire scored the winning goal in the 2016 Cup final at the Aviva Stadium, his extra-time strike helping City beat the league champions and stop them from securing another double.

Preston North End striker Maguire has been on an upward trajectory ever since that last gasp winner, with his call-up from Martin O’Neill for the crunch World Cup qualifiers against Moldova and Wales this weekend the latest success in a fine year.

He said: “[I have] good memories going back to the Aviva, some mixed emotions actually. The year previously I wasn’t even on the bench for Dundalk and the year later I scored the winner and now a year on I’m on the verge of nearly playing for my country. It’s mad how football turns around. I’ll be looking forward to the game whether I’m involved or not.”

Along with Aston Villa striker Scott Hogan and Millwall forward Aiden O’Brien Maguire is one of a clutch of fresh faces in O’Neill’s squad for the defining weekend of the qualification campaign.

And with Jon Walters absent through injury it is not beyond the realms of possibility to think one of the trio might be thrown in at the deep end and earn their international debut against the Moldovans or in Cardiff.

Maguire said: “I just need to work hard in training this week and show the gaffer I’m well capable of coming in and doing a job. But it’s up to him at the end of the day, it’s his decision and I’ll just have to be patient.

“Whether it’s this weekend, in the two games, or a month down the line or next year, I just need to be ready and patient and be mentally ready.”

This year has seen Maguire establish himself as the best goalscorer in the League of Ireland – he remains top of the scoring charts, with 20, despite making his last Premier Division appearance in June.

The 23-year-old’s impressive form earned him a move to Preston North End in the summer, and since then he has made a solid start to life in the Championship – scoring twice in nine appearances, with Alex Neil’s side currently in sixth place in what is an incredibly competitive division.

Maguire has largely featured on the wing since his move to Deepdale – but he has taken well to his new position so far, he said: “Most of my time at Cork City I played as a number nine. I think John Caulfield, the way he had us playing, was to get it out wide and get balls into the box.

“I scored a lot of goals from crosses into the box from Karl Sheppard and Stephen Dooley. It’s been a bit different for me playing for Preston because I’m the guy providing those crosses. I’m loving it out there, it’s a bit different but the gaffer will decide to give me the chance out on the wing or up front, anywhere on the pitch I know I will give 110 per cent and hopefully do the job.”

Maguire’s ability and importance to Cork can be seen by the champions elect’s failure to get over the line and put the title race to bed since his departure, but he feels he has already improved as a player since his move to north west England.

He said: “I’ve slightly improved my game since I’ve gone to England. I’ve had to adapt to the higher standard. My decision making has improved, there have been some games this season that the ball has been taken off me a bit too easily whereas in the League of Ireland I might have had a bit more time on it.

“I haven’t improved massively in the past couple months, I’ve slightly improved my game mentally as well because in the Championship you have to stay focused for 90 minutes.”

For Maguire, 2017 has been a year to remember – pulling on the green shirt and helping Ireland to a place at the World Cup would prove the crowning glory.

1 The Offload: Ireland are stuck in no man’s land
2 Nicky English: Galway and Waterford face battles with fatigue in All-Ireland semis
3 Every kind of wind imaginable was against Tipperary football - and they came through
4 Ken Early: Roles have reversed for Guardiola and Mourinho
5 Ireland’s loss set up by shambolic lineout and England’s supreme backrow
Real news has value SUBSCRIBE
Crossword Get access to over 6,000 interactive crosswords