Gareth Bale will not play for Wales against Ireland

Wales are one point clear in second place in Group D, and face Ireland on Monday 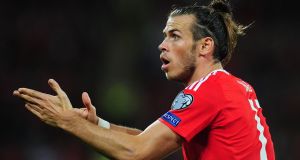 Wales are set to be without Gareth Bale for their final two World Cup qualifiers. Photograph: Getty Images

Gareth Bale is to sit out Wales’ remaining two World Cup qualifiers, including next Monday’s match against Ireland.

On Tuesday sources close to the Welsh FA confirmed the surprising social media speculation that Bale’s hamstring injury will in fact rule him out of Friday night’s qualifier and the visit of Martin O’Neill’s team to Cardiff three days later.

Bale joined up with the Wales squad on Monday and trained with a recovery group.

He had sat out Real Madrid’s La Liga 3-1 win over Espanyol on Sunday, five days ahead of Wales’ trip to Georgia.

Real manager Zinedine Zidane said at his pre-match press conference that Bale had suffered a calf strain against Borussia Dortmund in the Champions League last Tuesday. Yet since then Zidane had played down the extent of the injury - which is now being referred to as a hamstring problem - and suggested that the Welsh talisman would be fit to resume his international duties.

“He was suffering after the game in Dortmund,” explained Zidane. “He strained his hamstring but in the end it’s nothing. It’s not an injury. I’ve spoken to him and the doctors.”

A belief echoed by Wales manager Chris Coleman who told the media on Monday; “In the last camp Gareth came to us and he’s probably fitter now than he was then. He ran his socks off and was at the heart of everything.”

1 Gary Neville in Qatar an exercise in semi-journalism
2 Owen Doyle: Creeping professionalism of schools rugby a threat to the game
3 Jürgen Klopp insists Liverpool title party is not on his mind
4 Investment in our Olympic hopefuls may be costly – but it’s worth it
5 Meet the Iraqi-American behind Conor McGregor’s success
Real news has value SUBSCRIBE
Crossword Get access to over 6,000 interactive crosswords