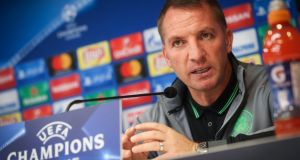 Brendan Rodgers: “We love to play at home but we are a team that enjoys playing away because the space can open up a little bit more.” Photograph: Virginie Lefour/AFP/Getty

Brendan Rodgers believes Anderlecht’s desire to get their fans back onside could play into Celtic’s hands in the Champions League clash in Brussels.

The Belgian side are in some disarray after the departure of Swiss manager Rene Weiler with former striker Nicolas Frutos placed in interim charge.

Anderlecht came from behind to win 2-1 in the league against Waasland-Beveren on Saturday but are seventh in the table, nine points off the top, and they lost their Group B opener 3-0 away to Bayern Munich.

With the pressure on Anderlecht at the Constant Vanden Stock Stadium, Hoops boss Rodgers said: “When you are playing at home then you will see that as an advantage for you, as we see when we play in front of 60,000 people.

“. The home team sometimes have to come and try to show their supporters that they have the intent to win and of course that works well for us also.

“We can control the ball, be good in possession but we are also a fast team who can counter-attack. But I am sure it makes for a good game and we will see how it turns out.”

Rodgers, who revealed that teenage defender Anthony Ralston “has a slight tear of his meniscus” but will be available until he rests during the international week, will not underestimate the Belgian champions.

He said: “It is always sad when a manager loses his job so there is clearly some problems there in relation to that. But I suppose Anderlecht will see this competition as an opportunity to try to turn that fortune around.

“And obviously you never know what happens with a change of manager, sometimes you have that bounce effect, it is a clean slate again and sometimes an interim manager will come in and work until the new manager comes in.

“We have tried to do our best to analyse and study Anderlecht. They have lost a couple of games so far in the league which they will be disappointed with but it will still pose a threat for us, it will be a difficult game, especially away from home.”

On Ralston, who was made unavailable for the Scotland Under-21 squad, he said: “He can still train and work and he won’t need an operation. What will help him will be rest. He is available and myself, along with the medics, have looked what is going to be the best for him.

“He will be available until the weekend and then he will have that rest which will hopefully allow him to repair and we will see where he is after the international break.”