Conte pushing Hazard to be ‘decisive in every moment’ 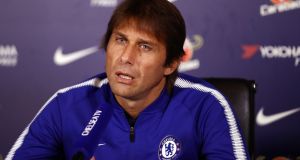 Antonio Conte is intent upon coaxing “decisive moments” from Eden Hazard in every appearance as the Belgium forward seeks to establish himself as one of the best players in the world by excelling in the Champions League as well as the Premier League.

Hazard is ready to start his first top-flight game of season, against Manchester City, having recovered from summer ankle surgery, and he excelled in his side’s victory at Atlético Madrid in midweek. The playmaker’s performance was key to Chelsea’s dominant display and prompted Álvaro Morata, with whom the Belgian has struck up an immediate on-field understanding, to declare the 26-year-old one of the “best three players in the world”.

Conte considers this season an opportunity for Hazard to justify such bold claims and has sensed the player’s own determination to hoist his game to a new level. “In every game he finds a way to be decisive: to score or to make an assist,” said the head coach. “I love this from him, and I ask it of him. If God gives you this talent, you must exploit it. My task is to try and push him to be decisive in every moment, in every game.

“Sometimes, if Eden scores one goal, he’s happy and then he prefers to make an assist rather than scoring twice. I see with Ronaldo that if he scores once, he wants two, three, four. It’s the same for Messi. So, yes, Eden can improve. It’s not about being selfish. I don’t like selfish players. Eden is not selfish. He’s a player who loves to play football. I like this attitude.”

Hazard, like his team-mates who played in Spain, will be assessed right up to kick-off by Chelsea’s medical staff to ensure they are fully recovered from their midweek exertions and ready to confront the league leaders. Yet Conte expects Hazard to declare himself available.

“I’m seeing great determination in him,” the Italian added. “Usually during the season you have ups and downs, but last season he was impressive for his consistency. This season he must show this again. Also in the Champions League, not only the Premier League and FA Cup. In every game he plays, we must see that.”