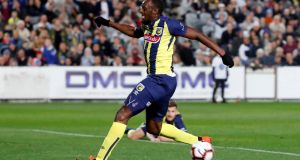 Usain Bolt’s first touch is “like a trampoline” and he will never make it as a professional footballer, according to former Republic of Ireland international Andy Keogh.

Eight-time Olympic gold medallist Bolt has been offered a contract by Australian side the Central Coast Mariners following a trial period.

The Australian FA said it is working with the A-League club to help fund a deal for the 32-year-old Jamaican.

But ex-Wolves and Millwall striker Keogh, who plays for Perth Glory, is unconvinced by Bolt’s ability.

“It’s nice to have the attention on the A-League but him playing in the A-League, that’s not for me,” Keogh told Off the Ball.

“For me, he’s not going to be able to make it [as a footballer]. He’s shown a bit [of potential] but it’s a little bit of a kick in the teeth to the professionals that are in the league.”

Asked about the Jamaican’s first touch, he added: “From what I’ve seen, it’s like a trampoline, so I’m not too sure.”

Keogh, who won 30 caps for his country, added that a professional contract for the former sprinter would be “farcical”.

“If there’s someone who genuinely thinks he’d be a good football addition, I don’t think they should be in a position to make those calls,” added Keogh.

“It’s fine from a marketing point of view but from a football perspective, it’s a little bit farcical.

“He says he’s chasing a dream of becoming a professional footballer yet he’s come out with quotes about he wants X amount [of money] when, if you’re chasing the dream, it’s not about the money and he’s obviously contradicted himself massively there.”

The Mariners have said that “without the contribution of an external third party” it was unlikely that Bolt and the club would agree terms.

Huddersfield’s Australia international Aaron Mooy believes Bolt has generated plenty of positive publicity for the A-League, but declined to comment on whether he deserved to be offered a contract by the Mariners.

“He’s obviously a world-class athlete and he’s given the A-League a lot of exposure recently,” Mooy said. “We’ll see if he can play as well.

“It’s not for me to say if he should get a contract or not. It’s up to the Central Coast Mariners, the club he’s at. I don’t want to speak about it too much.”

When asked if he would like to play against him, Mooy added: “Definitely not because he’s obviously very fast, but I’m just sitting back and watching what’s happening.