Irish soccer was built on skill and not teams of giants 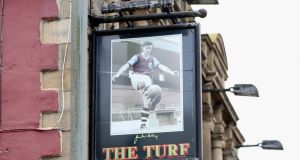 The Turf pub sign in Burnley depicts an image of ex-player, Northern Ireland’s James McIlroy, who was instrumental to the club’s league title success in 1960. Photograph: Ian MacNicol/Getty Images

When Jimmy McIlroy died in August, it was a moment to return to his autobiography, Right Inside Soccer. It was written in 1960 when Burnley had just won the First Division league title. McIlroy was regarded as the brains of the best team in England. He was 29.

The book is a slim gem of analysis and frustration. Matt Busby, no less, wrote its foreword, where he said of McIlroy: “Jimmy undoubtedly possesses something, which may be indefinable, but which is shared only by the all-time greats. Subtlety dominates his game.”

There is no shortage of opinion from the author: “Was Duncan Edwards really 18 caps better than Eddie Colman?” asks McIlroy, a question that might seem insensitive given both Edwards and Colman had perished only two years earlier in the Munich air crash.

McIlroy’s issue was that Edwards was the more lauded player in England because “one of his many attributes was power in the tackle”.

Subtlety, in McIlroy’s eyes, did not dominate Edwards’ game.

It is a theme of the book, McIlroy’s distaste of athleticism over skill, of speed of foot over speed of thought. He and Danny Blanchflower were midfield companions in green and they supported one another in their desire, almost poetic in Blanchflower’s case, to exhibit style and wit, rather than force and grit.

After a particularly aggressive meeting between Scotland and Northern Ireland in Glasgow in 1958, McIlroy quotes the bloodied Blanchflower saying: “If that’s the kind of fight you want in international football, I’m having no part of it”.

As McIlroy had noted two pages earlier, the Irish team managed by Peter Doherty had won at Wembley against England in 1957 and they had not done so through battering England physically.

The English FA, viewing Irish football with less than parity of esteem, did not host Northern Ireland, or ‘Ireland’ as it was, or Eire, at Wembley until 1955. The attitude infuriated Doherty.

In ’57 when McIlroy gave the Irish the lead with a penalty, he was able to write: “I took the kick myself and scored Ireland’s first-ever international goal at Wembley.”

(All northern Irish players of that era – and media and many fans – referred to Northern Ireland as Ireland).

Fast forward six decades to Oriel Park, Dundalk, last Friday. In Stephen Kenny’s programme notes before Dundalk clinched their fourth League of Ireland Premier Division title in five seasons, he wrote: “It is important to dispel the current train of thought that it is in the DNA of Irish players to play a more direct style . . . that somehow being Irish you were born with a skill deficit.”

It came a week after the Denmark midfielder Thomas Delaney referred to “primitive” Irish tactics in the Nations League match in Dublin. Apparently there was a compliment in there regarding obduracy. But primitive doesn’t sit well.

The applause you can hear for Kenny is probably from Jimmy McIlroy, because somewhere along the way an island that post-war produced George Best, Johnny Carey, Charlie Tully, John Giles, Liam Brady, Martin O’Neill, the Blanchflowers and McIlroy allowed itself to be portrayed as not these players. Yet that’s some DNA.

Roy Keane, the greatest Irish player of the recent past, was a force of nature, yes, but he was a bit more than that. Keane was authoritative. He could pass and move and, just as importantly, pass and pause.

It must have delighted McIlroy who 60 years ago was slaughtering the English FA for their coaching methods – he wasn’t too keen on the Irish FA either – saying witheringly that Stanley Matthews “would be ordered to part with the ball more quickly”.

This was because “the value of speed is overemphasised. The brilliant 1953-4 Hungarians did English soccer a great disservice in this respect. Almost overnight . . . coaches decided Hungary’s secret of success was speed. Yet Hungary’s speed was a complete fallacy. Indeed, on that fateful day most English players were moving twice as fast as their brilliant opponents.”

This is the sort of intelligent, intuitive appreciation of the game continued by Liam Brady 20 years later in Italy when he told Hugh McIlvanney: “Thinkers are the deadliest men.”

That’s DNA. The tradition of Irish thought was right inside the beginnings of soccer; the penalty-kick was invented by William McCrum from Armagh; the offside law was changed in 1925 due to Bill McCracken from Belfast.

When McIlroy and Blanchflower passed a penalty-kick to one another against Portugal in a World Cup qualifier in 1957, they were doing something Johan Cruyff would be given credit for 25 years later and Lionel Messi 35 years after that. But it was a Peter Doherty idea.

Doherty was one of Bill Shankly’s heroes. Admittedly he believed hugely in strength of character and physical determination, but Doherty allied it to tactical awareness. He once started a match with two left wingers, he switched jersey numbers around – both of which were unheard-of.

And he played 5ft 6in Wilbur Cush in central defence against Italy. Cush, Doherty saw, could play as well as fight.

In fact, none of the players mentioned above were or are over 6ft tall. The current Northern Ireland captain, Steven Davis, is 5ft 8in. Davis is another give-and-go creative midfielder. Damien Duff, Wes Hoolahan, these players are part of an Irish style far removed from long-ball, chase-it stuff. Irish football is not a land of giants.

Yet the fighting Irish stereotype endures. It probably settled on Irish football the day Jack Charlton told players to hit the ball into the channels even though Ronnie Whelan had joined Brady in midfield with David O’Leary and Paul McGrath behind.

Charlton was more thoughtful than he is painted, but it is hard to escape the feeling that the success of his methods altered perception and, perhaps, self-perception.

Judging by Delaney’s [Thomas] comments, the view persists externally – though presumably he didn’t see Davis pass Bosnia’s Juventus midfielder Miralem Pjanic off the park in Belfast in August. Northern Ireland have received criticism for a supposed reliance on dead-balls, but they are not long-ball. If Michael O’Neill adheres to pragmatism, it is due to resources.

Martin O’Neill will say the same, but it must be jarring to hear a comment such as Delaney’s. It is not a good impression, correct or not.

The sting has been felt and maybe Irish football, the broad sweep of it, should challenge itself. Internationally, is style a part of the substance? Domestically, why are clubs still scratching around for cash? Why is infrastructure still so poor? Overall, can there be respect without self-respect?

The Irish football personality is not one-dimensional. It cannot be.

But if Irish football does not remember itself, its previous subtlety, its different power, its cerebral DNA, then who will?