Emery implores Arsenal to keep bearing down on goal 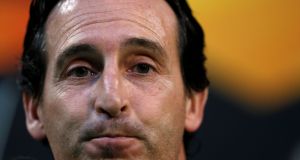 Unai Emery wants to see his Arsenal side continue to be entertainers as they look to move a step closer to the Europa League knockout stages with victory at Sporting Lisbon.

The Gunners head to the Portuguese capital on a 10-match winning streak and have scored at least three goals in five of their last seven outings.

Only Manchester City have scored more Premier League goals than Emery’s men, who wrapped up a 3-1 win over Leicester on Monday with a superb team goal finished by Pierre-Emerick Aubameyang.

It is the second game in a row in which a free-flowing attack led to a memorable goal after Aaron Ramsey completed a similar move in the recent thrashing of Fulham – and Emery is keen to see more of the same.

“We want the balance – the balance to score a lot and also not to concede a lot of goals,” he said.

“But for me the individual goalscoring statistics for the players is very important, as it is for the supporters to be excited with many things on the pitch. Scoring goals is important for this spectacle.

“For me, with this balance we want to score a lot and with different players. I want our strikers to have a lot of chances to score but also to find the balance defensively.”

While the likes of Aubameyang, Alexandre Lacazette and Mesut Ozil have been rightly receiving the plaudits for their attacking efforts, summer signing Lucas Torreira has also played his part.

The Uruguay midfielder joined from Sampdoria and had to wait five games to be handed his full debut by Emery.

But the tough-tackling 22-year-old has quickly established himself as a fans’ favourite, with fellow midfielder Granit Xhaka full of praise for the recent addition.

“You can see that he’s important for us because he’s strong in defence and in duels,” he said. “He can play easily from side to side and going forward. He helps with our balance.

“Lucas gives us good balance in the team between offence and defence. He lets me play my game with the ball and go a bit more in front. I am happy with him and the other guys playing in the midfield.”

Both Arsenal and Sporting have won their opening two matches in Group E so any winner at the Estadio Jose Alvalade will be in prime position to progress when the pair meet again next month.

For that reason Emery has brought a strong squad with him, despite the fact kick-off in Lisbon comes less than three days since the victory over Leicester.

“In this moment we are two teams both in the first position and our mind is to arrive first in this group and to continue in our way thinking how we can improve.

“Tomorrow is a very, very big match – it is important for our confidence. We want to win against Sporting.”