Wins for Mönchengladbach and Dortmund put into perspective by messages 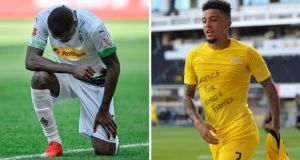 Marcus Thuram and Jadon Sancho have both paid tribute to George Floyd, whose death has sparked protests across the US and Europe. Composite: Getty/AFP

The England winger Jadon Sancho has paid tribute to George Floyd, revealing a message under his shirt after scoring for Borussia Dortmund on Sunday. Sancho’s gesture came after Mönchengladbach forward Marcus Thuram took a knee after scoring in an earlier Bundesliga game.

Sancho scored Dortmund’s second goal at Paderborn and took off his shirt to reveal the message “Justice for George Floyd” written on his undershirt. The 20-year-old was booked by the referee, Daniel Siebert, for removing his shirt. Sancho also scored Dortmund’s third goal as they won the game 3-1.

Earlier on Sunday, Thuram scored for Borussia Mönchengladbach against Union Berlin in their 4-1 win. The French forward then moved away from his teammates to go down on one knee, a symbolic protest against police brutality that former NFL player Colin Kaepernick first used in 2016.

The moment was quickly picked up by hundreds of thousands on social media as being supportive of the Black Lives Matter movement. “He [Thuram] cut to the chase,” said the Gladbach manager, Marco Rose, after the match. “He took a stand against racism, one that we wholeheartedly support.”

Sancho and Thuram’s gestures of protest come amid riots in several major US cities, sparked by the death of George Floyd in Minneapolis. On Sunday, thousands gathered in London on Sunday to protest against the killing of an unarmed black man by police.

The protests were held at Trafalgar Square and outside the US Embassy in Battersea, while thousands also gathered in the German capital, Berlin, on Saturday.

Earlier this month, Sancho retweeted a tweet relating to Ahmaud Arbery, the jogger who was shot and killed in Georgia in February of this year. “Black people deserve better than what the world gives us. We’re treated as less than human,” the tweet read.

On Saturday, the Schalke midfielder Weston McKennie wore a “Justice for George” armband during their defeat against Werder Bremen on Saturday. The USA international tweeted after the game: “We have to stand up for what we believe in and I believe that it is time that we are heard!”

Following Sunday’s game, Borussia Mönchengladbach tweeted a picture of Thuram’s celebration with the caption: “No explanation needed”. Marcus Thuram is the son of the World-Cup winner Lilian, who has become one of the most eloquent and powerful voices to speak out against racism in football. – Guardian