A total of 1,130 players and club personnel were tested with no positives recorded 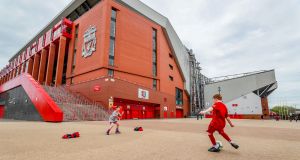 The Premier League announced its first all-clear round of Covid-19 testing on Saturday, underlining the optimism of the Government’s earlier message that elite sport was back on track.

A total of 1,130 players and club personnel were tested on Thursday and Friday, with no positive results. The previous three rounds of testing had yielded 12 positive tests out of 2,752.

This bout of testing was the largest yet, with each club’s maximum allocation upped from 50 to 60, and also the first to take place since the unanimous vote to begin contact training.

There was a reminder of virus’ continued presence by the EFL’s subsequent results, which brought 10 positive cases from 1,058 in the Championship and seven more from just 135 taken by those in League Two.

But for now, the absence of any live cases in the top-flight will be seen as a positive for the scheduled restart date of June 17th.

Oliver Dowden, Secretary of State for Digital, Culture, Media and Sport, appeared at the daily Downing Street briefing to announce that competitive sport was being approved for a behind-closed-doors return from next week.

Dowden said each individual sport would make its own judgement on when to get going safely, but offered published guidance applicable to all disciplines and produced in consultation with Public Health England.

“Two months after sport stopped and after weeks of round the clock discussion with medical experts and professional sports bodies, I’m delighted to announce today the Government has published guidance which allows competitive sport to resume behind closed doors from Monday at the earliest,” said Dowden.

“Football, tennis, horse racing, Formula 1, cricket, golf, rugby, snooker and others are all set to return to our screens shortly.”

Horse racing will lead the way with a 10-race card at Newcastle the first such meeting since March 17th.

British Horseracing Authority chief executive Nick Rust outlined his hopes that the change in circumstance would be a boon for the nation’s morale.

“I’m sure the return of racing will be welcomed by all those who’ve missed the excitement of live sport and the majestic sight of racehorses running at full gallop,” he said.

“We hope it will lift the nation’s spirits in difficult times and look forward to seeing our owners and racing fans back at racecourses as soon as that’s possible.”

At present those two groups will be kept away from venues that are subject to strict protocols, but the news is still an overwhelming positive.

“This is an important stage towards a complete return for our industry and will help protect livelihoods and businesses,” said Rust.

“There is still a tough battle ahead before we can get fully back in business, but this is a resilient and world-leading industry and we are ready for the task.”

With players on both sides of the Atlantic back in training, the CWI board has signed off on the next stage of planning for the trip.

“The decision comes only after CWI medical and cricket-related representatives and advisers have been involved in detailed discussions with the England and Wales Cricket Board (ECB), and its own medical and public health advisers,” said a statement.

CWI chief executive Johnny Grave told the BBC’s Today Programme there was “some nervousness” among the playing group but that discussions were constructive.

“I think ultimately that our players, we’ve been very open and honest with them and sharing plans from the day we got them from the ECB,” he said.

“I think that’s helped players understand what this Tour might look like, and from all the players that I’ve spoken to, there’s an eagerness to go to England and get some live cricket back on.”

The games are due to take place in so-called ‘bio-secure’ environments at the Ageas Bowl and Emirates Old Trafford, where players would stay in on-site hotels. The West Indies had also factored in the prospect of a 14-day quarantine and are expecting to be able to spend that time at, or a near, a cricket facility where they could use the time on acclimatisation and training.