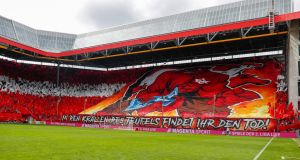 The German language, as should be expected, has a term for it: Grössenwahn. There is not a direct, precise English translation. Megalomania, maybe, though perhaps hubris is better. Grössenwahn implies overestimating your abilities, possessing delusions of grandeur.

It is the word Oliver Voigt reaches for as he tries to describe the fate and fall of Kaiserslautern, the German third-division club he has been tasked with restoring to something resembling their former self, now, in a precarious moment for the sport, with even less margin for error.

This is, after all, not a team accustomed to such reduced circumstances. Traditionally, Kaiserslautern are one of Germany’s grandest clubs. As recently as 1998, they were Bundesliga champions, and a year later they made the quarterfinals of the Champions League. Their stadium was a venue for the 2006 World Cup. It holds 50,000 people, and is named after Fritz Walter, the captain of the West Germany side that won the 1954 World Cup.

Kaiserslautern had five players on that team, more than any other club. “That victory gave the whole nation its dignity back after the war,” Voigt said. “Winning the World Cup built German identity, and five of the team were from this club. Kaiserslautern was a club in the center of German emotion.”

Generations of Germans, he said, saw the club as a peer of Bayern Munich, Borussia Dortmund and the rest of the country’s great powers. Now, though, Kaiserslautern is “on its knees.” The club has spent most of the past decade in Germany’s second division. In 2018, for the first time in their history, they sank into the third. (Before the current season was suspended, they were midtable.)

“There is an easy answer to what happened,” said Voigt, who was recruited late last year to be the chief executive. “If you spend more than you earn, if you act like you are bigger than you are, you will end up like FCK.” Kaiserslautern might be an extreme example, but it is far from alone. Over the past two decades, a current has swept through European soccer, drastically shifting the game’s landscape. An array of traditional, big-city powerhouses have slipped from their perch, caught and overtaken by a class of insurgent teams, fueled by cash and ambition, unencumbered by history.

There were others, too, teams that seemed on the verge of slipping into the abyss, great names that had been treading water for just a little too long: West Ham and Newcastle, perhaps, or Fiorentina, or even AC Milan. All found themselves in the same trap: first left behind financially by the game’s superpowers, then caught in the slipstream of the young, smart and nimble – not just teams like RB Leipzig, Manchester City and, at a European level, Paris St Germain, products of, and ambassadors for, either corporate conglomerates or nation states, but also the likes of Wolves, Atalanta, Sassuolo and Eibar.

It was in Germany, though, that the pattern held most clearly. Kaiserslautern have been joined in the third division by 1860 Munich; next season, Karlsruhe might be there, too. The second Bundesliga contains both Stuttgart and Hamburg, emissaries of two of Germany’s biggest cities and former champions. Werder Bremen, the German champions in 2004, could drop into the division next season.

Each of these case studies can trace their demise to a different set of circumstances, of course. Some teams can point to financial mismanagement, others to chaotic ownership. Some have just made poor decisions, and then made more in trying to fix them.

But there are common threads that bind the clubs, and as soccer begins to come to terms with the greatest crisis it has faced in a lifetime, it is possible to discern in them a warning for what may come next.

The coronavirus pandemic represents an existential threat even to the biggest clubs in Europe, the ones that regard themselves as too big to fail. As Karl-Heinz Rummenigge, the chairman of Bayern Munich, said, it is already a crisis. Failing to play out the season, which resumed on May 16th, and thus being forced to hand money back to broadcasters, would make it a disaster.

The prospect of playing games behind closed doors for the rest of the year, Rummenigge said, would “have a huge impact” on everyone: The loss of revenue from ticketing, corporate entertainment and merchandise is “something everyone has to care about, and maybe the big clubs even more.”

The risk, of course, is that clubs will not adapt as they should to that new reality, that they will continue to spend more than they earn, to think they are bigger than they have become, to succumb to the temptation of Grössenwahn. As the fallen giants can attest, after all, when circumstances diminish, the pressure to succeed does not always follow suit. Not straightaway, sometimes not at all.

“If we win one game, the assumption is that we will be promoted,” Kaiserslautern’s Voigt said. “If we win a few, people talk about the Bundesliga. There is immense pressure on the club. It is natural: Apart from our youngest fans, everyone in the stadium saw this team win a title. For them, where we are now feels unreal.”

That pressure leads to a spiral of quick fixes and kneejerk reactions. Managers, directors and ideas come and go, none of them seen through to their conclusion, none given a real chance to succeed. “The staff here have seen so much change,” said Thomas Hitzlsperger, once a player for Stuttgart, and now, at 38, the club’s chief executive. “There has been no consistency. It is the only club in a big city. The fans get frustrated quickly. We have Bosch and Porsche and Daimler here. They expect to see the best. The club has lacked patience to have a plan and execute it.”

At the same time, there is a built-in resistance to new ways of thinking, a tendency to rest on the laurels of tradition. Hitzlsperger noted, even before he became chief executive, how “slow-moving” Stuttgart was; he persuaded the club’s board to hand him control by vowing to help the club become more modern. He talked, at his interview, of how Stuttgart could still be “proud of its history,” but needed to learn to be a “21st century club.”

The obvious contrast here, of course, is with Leipzig and Hoffenheim – two clubs effectively founded in the past two decades, teams whose whole identity is tied up in modernity. But those are not the only reference points for Germany’s faded upper middle class.

“Mainz and Freiburg are not big-status clubs, but they are regulars in the Bundesliga,” said Jonas Boldt, sporting director of perhaps the biggest example of a fallen power in European soccer, Hamburg. The fabled Dino of German soccer – so-called because they had never been relegated – and one-time champions of Europe, Hamburg finally slipped out of Germany’s top flight in 2018. Their demotion could serve as the moment that the new order finally toppled the old, when European soccer’s traditional middle class gave way to a younger generation of not just teams but ideas.

Their demise, in Boldt’s eyes, was the conclusion not just of a “vicious circle” of bad decisions, but a sign that the club had become too comfortable in itself, too content to stare misty-eyed at what it used to be. “Tradition and romance are important,” he said. “But you have to work professionally to try to develop something.”

Boldt joined Hamburg last summer, after they had spent a full season in the second division. Like Voigt and Hitzlsperger, he was chosen to take his club back to where they used to be. All three men are ambitious, optimistic, energetic. All three are, for their posts, relatively young. Boldt, having built his reputation at Bayer Leverkusen, was lured to Hamburg by the “challenge” of building something lasting. That challenge was fearsome before the pandemic. In the age of coronavirus, it is more daunting still. Kaiserslautern, Stuttgart and Hamburg must learn to function on reduced budgets, in an alien, sterile environment, in an atmosphere of deep uncertainty.

But those three, at least, had already identified the need for change, realising that instead of resisting the tide, they needed to turn it. There will be many others, though, in this bleak new reality, for whom that realisation has not yet dawned.

Some may look at Kaiserslautern, Stuttgart, Hamburg and the rest and learn the lessons of their travails. Others, believing themselves insulated by history, may stumble into precisely the same traps, fall into the fissures, swallowed up by this fractured, shifting landscape. – New York Times

4 Defeat to Burnley ‘a massive punch in the face,’ says Klopp