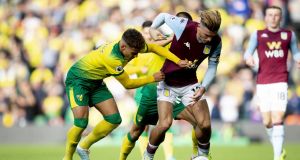 Premier League sides battling against relegation are expected to oppose the implementation of a points-per-game calculation if the Covid-19 pandemic forces the season to be suspended again after its proposed resumption on June 17th.

While the league is aiming to finalise plans around Project Restart on Thursday, one pressing issue is which three teams should be relegated if the season is halted for a second time. Clubs in the bottom six believe it would be unfair to use a mathematical formula to decide relegation, especially as some teams fighting for survival have more inviting run-ins than others.

The issue promises to be tricky for the league to resolve. Some clubs opposed to using PPG to work out the final standings could also argue that nobody should fall into the Championship if attempts to complete the remaining 92 games in full are disrupted by the pandemic. However scrapping relegation remains unlikely, with the Football Association telling clubs last month that the season needs to be settled on sporting merit.

Cancelling relegation would create further problems for the game’s authorities. There is little appetite to expand the number of teams in the top flight next season, while the Premier League could face legal challenges if teams at the top of the Championship are denied promotion.

While the top-flight clubs do not have to come up with a solution on Thursday, they will need to devise a plan for curtailment by the time action resumes. Yet those discussions could be complicated given the opposition to PPG.

At the moment Norwich, Aston Villa and Bournemouth are in the bottom three. West Ham and Watford are above 18th-placed Bournemouth on goal difference and Brighton, who were 15th before the season was suspended in March, are two points above Eddie Howe’s side. However Villa will go 16th if they win their game in hand at home to Sheffield United on June 17th, pushing Watford into the drop zone.

The situation near the bottom is delicately poised and there are bound to be disagreements if the season has to end prematurely. One argument against PPG will be that teams with tough runs straight after the restart could be affected disproportionately if they cannot play games that look easier on paper further down the track. For instance West Ham begin with games against Wolves, Chelsea and Tottenham but still have to play Watford and Villa at home. By contrast Bournemouth start with games against Crystal Palace, Wolves and Newcastle, while Watford play Leicester, Burnley and Southampton.

Were PPG to be used now Bournemouth, Villa and Norwich would go down. An alternative formula, weighting to reflect home and away results, would see West Ham take Bournemouth’s place in the bottom three. – Guardian