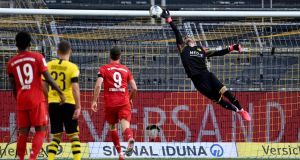 It turns out football without fans is something, after all. It is not nothing.

It turns out the play is still the play, the actors still act and the playwright’s words stand. The theatre may be empty, and the sense of theatre absent, but that’s entertainment.

We are not witnessing amateurism; but we are seeing matches in the space in which amateur players – and reserve and youth team players – exist. No crowds, no noise, just football. It is not normal; it is not abnormal either.

For some, this has been an unwelcome tap on the shoulder. Understandably they feel their input has been diluted, downgraded. They wish to be supporters, not spectators. There’s a difference.

For others it has been a glimpse of the game, as in sport, they fell in love with in the first place – uncomplicated by the story around it, organic action generating its own drama, producing its own commentary.

The Bundesliga’s new reality has also brought a renewed focus on the players and just how much talent it takes to participate in 45 minutes of the calibre of Borussia Dortmund versus Bayern on Tuesday. Even those feeling alienated by the circumstances will have found it hard to suppress admiration at the sheer pace and intensity of that first half.

Here were two sets of committed professionals displaying close-quarters skill, imagination and dynamic physicality. It was high-level, high-stakes football. There was a title to clinch and you could tell.

It was serious football. There were fewer distractions – no tiresome drumbeat from appointed supporters, less play-acting from players and no one in the seat beside you getting up 10 minutes before half-time. There was nothing manufactured about the players’ attitude, just as there was nothing contrived in the temporary jeopardy Eintracht Frankfurt brought to last Saturday’s match in Munich, when 3-0 suddenly became 3-2.

For about 10 minutes there was a feel of next-goal-wins and the reduced surroundings added to the impression. But clearly it was not that. Robert Lewandowski was playing.

The main difference was these goals occurred in silence, when usually there would be a swell of anticipation, then a roar. It was disconcerting, not what we are accustomed to. Then again, this is where the world is, playing 4-3-3 in a holding pattern, waiting.

If it seems like a stretch to go from Bayern Munich 2020 to Cliftonville in 1879, these are strange days. Perhaps this is what prolonged solitude does: makes you think of Solitude.

Cliftonville are the oldest football club in Ireland and Solitude has been their home since before the Association game joined cricket and athletics at the club. Solitude pre-dated those, too, as a place, when it was on the tranquil outskirts of Belfast.

Given Cliftonville FC have endured the odd barren year since, when attendances slowed, the name of their ground has left the club open to the elements of irony sweeping across north Belfast. It remains a great, original name for a stadium, though. Einsamkeit in German, apparently.

Visit Solitude, and as is the case with a few grounds in Ireland, you are taken back, if not as far as to when Solitude was staging some of the first organised matches on the island – 1879.

Football was called ‘Scottish Association Rules’ then. The phrase appeared in the advertisement Cliftonville placed in the News Letter in October 1879 seeking ‘Gentlemen Desirous of Becoming Members’. There would be a practice match on Saturday, kick-off 3.30.

Cliftonville were determinedly amateur but the next line read: ‘Admission, Sixpence. Ladies Free.’ And what that demonstrates is that even before it became professional, football was considered an activity to watch, something to build your Saturday off around, something you would invest cash in. Participation was not simply about playing, it was about watching.

Professional football was being monetised even as it was born and those who would be paying for the new entity were spectators – as they were first known.

In Paul Brown’s history of football’s followers Savage Enthusiasm, spectators became supporters before they were eventually referred to as fans. It was short for ‘fanatics’ and imported from American baseball. It was 1913 when ‘fans’ appeared as a term in the London Sketch and the inverted commas stayed for a while.

But the material significance of fans in football was established well before. Football was described as a “craze” in the 1870s and people flocked to watch the new feet-first game. It was the craze that never stopped.

Brown unearthed details of the 1902 FA Cup semi-final between Southampton and Nottingham Forest at White Hart Lane. Only 200 people travelled from Nottingham for the day. This was due to a smallpox outbreak in London.

Unimpressed, the Coventry Herald editorialised: “Football is too important a matter to take serious account of such a trifle as disease.” It went on to say “football must not be interfered with” and “notwithstanding smallpox” should continue “to the end of the season”.

Stupidity is not as new as it thinks it is.

But the Coventry opinion shows not just the importance of football as a game to play, but the whole idea of football as a cultural activity, and economy, and its role in our lives. Central to it were the customers – fans.

This is why the game has endured as a culture. Great players, great teams and great matches have provided excitement, but it has been the ordinary fan whose sixpence has kept the turnstiles moving. They in turn became a phenomenon, one capable of changing the outcome of a match with their savage enthusiasm. Ever been to Elland Road when the crowd is unamused?

So while it would be churlish not to appreciate the excellence of Joshua Kimmich or Raphaël Guerreiro in isolation, while there is pleasure in experiencing a different, fresh concentration on the play itself, and while there will be a commotion over the restart of the Premier League, it is all football without fans.

The beautiful game can tolerate this. It will be played forever.

The professional game cannot. It is at risk.