Studious Kompany ready to take Anderlecht back to the top 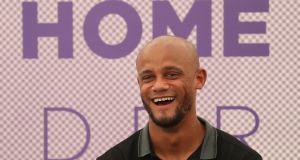 Vincent Kompany: “I have the chance to make my mark here and I’m proud that I have that opportunity.” Photograph: Yves Herman/Reuters

Vincent Kompany began his managerial career at Anderlecht on Tuesday by saying he was no Pep Guardiola but the Belgian club can expect a student of the game who has learnt a lot.

The Belgium central defender held his first news conference on his second day in the job, having ended his stellar career at Manchester City to return to his first club as player-coach.

The 33-year-old will certainly bring with him much of the wisdom he acquired in the Premier League under Guardiola.

“It was like being at university every day. He explained everything with such clarity and I learnt an enormous amount from him,” said Kompany. “I am no Guardiola by any means, let me make that clear. But I think I was a good student.”

Kompany will be seeking to take Anderlecht back to their dominant role in Belgian football after a season in which they were well behind the front-runners.

“I understand that there is a lot of work, but I’m really looking forward to starting. I have the chance to make my mark here and I’m proud that I have that opportunity,” he said.

Kompany, who told Guardiola he was leaving City the day before May’s 6-0 FA Cup final win over Watford, said he had been lured back to Anderlecht after discussions with the club’s owner Marc Coucke and sporting director Frank Arnesen.

“The idea of becoming a player-manager has grown gradually, by talking to Coucke, Arnesen and [board member Michael] Verschueren.

“The chance was too big for me to turn down and I think it was the right time to make this decision. Returning as a player only was not an option.”

Belgian football has been on the rise in recent years with talent spread across Europe’s top five leagues, and Kompany believes the potential at Anderlecht is enormous.

“There is more talent at Anderlecht today than when I started, much more,” he said. “We came sixth last year, so we have to get better than five other teams in one season. But my opinion is that with a few changes we can get there. I’m convinced of that. I feel I can start something incredible here. People who know me know I would not start something without a plan.”