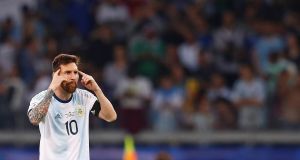 Lionel Messi in action for Argentina during their Copa America clash with Paraguay. Photograph: Yuri Edmundo/EPA

Lionel Andres Messi is 32 today. The little maestro made his Barcelona first-team debut at 16 so has spent half his life competing at the top level. He continues to be a phenomenon. But 32 candles on the cake means Messi’s best is surely gone.

Since that best entitles him to be regarded as perhaps the game’s finest ever player, acknowledging how even Messi can’t swerve time is hardly enough to spoil any birthday celebration.

Just as Pele is popularly recalled in the 1970 World Cup rather than limping to retirement with New York Cosmos, or Maradona is always remembered for that goal against England rather than his subsequent grotesque self-destruction, Messi’s status is already firmly in the popular consciousness.

He will always be the tiny figure with a ball seemingly tied to his feet, reducing opponents twice his size to bemusement, like he did against a stunned Getafe side when 19 and playing with a freedom that suggested a kid a lot younger.

That since then Messi has combined that outrageous skill with a capacity to bend even the most high-profile game to his athletic and imaginative will has become one of the great sporting wonders of our time.

Engaging in debate about whether or not the body of work he has committed to popular memory makes him the best ever is a futile exercise, one that usually says more about the prejudices of various advocates rather than any ambition towards a definitive answer.

Such answers are impossible whatever the sport. At Royal Ascot last week Frankie Dettori’s flamboyant brilliance had one happy winning trainer declaring him superior to Lester Piggott, a statement that had fans of the ‘Long Fellow’ spluttering into their champagne.

If such jockey judgements often come via the pocket then soccer’s are just as susceptible to sentiment.

There are those of us for instance who suspect that if presented with a fairytale transfer scenario that allows a single player from the last half century to pull our team’s chestnuts from the fire then Zinedine Zidane is the man.

Has there ever been a more complete player, two-footed in a way Maradona wasn’t, physically powerful enough to send Messi flying, as technically gifted as Cryuff but prepared to subjugate indulgence for the team, all of it topped off with an elegance and class Ronaldo can’t imagine.

Even loafing the miserable Marco Materazzi in that fateful final World Cup final was done with élan.

Such regal gestures aren’t Messi’s bag. Physically he can’t pull it off. Being five feet seven and just over ten stone means throwing shapes is a dangerous pastime. But diffidence extends also to those rare public utterances that are never anything but deathly boring.

So he still cuts an enigmatic figure. Unlike Cristiano Ronaldo’s relentless posturing and obvious attention-seeking, Messi’s continues to be an elusive character, a blank canvas allowing an adoring public project aesthetic virtues on him that might or might not be backed up by personal reality.

In that sense the little man has become a symbol for what many think is the best of the great old game.

It’s not about statistics even though his record of goals and assists is stunning, both in terms of totals and their consistent accumulation. But statistically Ronaldo fans can point to similarly impressive figures.

Then there’s the hoary old chestnut about Messi never having won a World Cup, something that doesn’t look like changing judged by Argentina’s woeful performances so far at the latest Copa America.

If Higuain did what he’d done a thousand times before when one-on-one in that 2014 final then it might well be different: but such tiny arbitrary margins can never be an accurate reflection of a player’s overall substance. Olivier Giroud is a World Cup winner. Messi isn’t. That’s one wonky QED.

In fact the real measure of Messi is the affection his game generates. Rather than being about physical power or tactical cynicism it is rooted in skill and the vivid imagination and temperament to implement it when it counts most. In other words soccer’s best bits.

It explains why popular affection for him is more universal than perhaps any other player in the history of the game. Even the most blinkered club supporter can park their biases to one side when it comes to admiring Messi. Grizzled ex-pros are known to go all weepy and rhapsodic about him.

So the idea of him waning will just feel wrong for a lot of people, fearful maybe of how hanging on until becoming a shadow of your former self is always a risk for those who’ve known great glory and are desperate to experience it again.

Except Messi’s good fortune is that his position in the popular imagination is already assured. That allows him the scope for an intriguing reinvention that could have us enjoying him for some time to come.

It’s been underway for a couple of years already, the man himself admitting he has been dropping deeper on the pitch. Going even deeper into midfield looks like a rational nod both to physical decline and a greater focus on cerebral qualities that are immune to physical decline.

His old Barcelona teammate Xavi has predicted Messi can play at the top level until he’s 40. That’s because of a football wit that basically allows him to play any position. Perception doesn’t always need physical power to tag along.

The prospect of the little man adopting a Xavi role at the heart of the Barcelona midfield, conducting with Pirlo-like virtuosity, is fascinating. It will be a different kind of mesmerising Messi but different and wrong don’t mean the same thing.