Ken Early: Hard to believe Neymar snr did not approve of son’s move to PSG 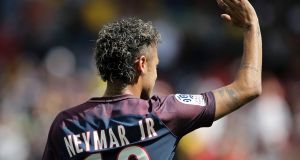 In leaving Barcelona for Paris, Neymar prioritised money, and money is what he has got. Photograph: Kamil Zihnioglu/AP Photo

March 8th, 2017, Camp Nou. Barcelona lead PSG 5-1 in the last minute of injury time. Neymar aims a free kick into the area. The ball is cleared and he retrieves it and shapes to hit another ball into the area – but instead feints past a defender, stealing a crucial extra few metres, before chipping it over the defensive line with his left foot. A beautiful feathery pass that is met by the outstretched foot of Sergi Roberto, 6-1 and Barcelona have pulled off the biggest comeback in European Cup history.

Ecstatic Barcelona players run towards each other – with one exception. The defining image of an immortal night is Lionel Messi standing atop the advertising hoardings behind that goal, celebrating with a joyous mob of Barcelona’s hardcore.

Yet for once, Messi had had a quiet game. He had scored the third goal of the six from the penalty spot, but that penalty had been won by Neymar, who had then scored a brilliant free kick for the fourth, scored another penalty for the fifth, and provided that sensational assist for the last-second winner.

If you were looking for the seeds of the discontent that led him to trade Barcelona for Paris, it might be tempting to look back to that night, when Neymar brought the magic and Messi walked away with the credit. But you would be looking in the wrong place.

Yes, Neymar’s performance that night established him in PSG’s minds as a signing who would get the world’s attention. Yet at that moment the notion of him leaving Barcelona for any club, let alone one in France, was simply ludicrous. When he moved that August, the talk was about how he wanted to escape Messi’s shadow. It seemed odd because he had always appeared to enjoy playing with Messi and Luis Suarez and never seemed resentful of the shadow. To this day the three of them share a WhatsApp group.

When the transfer was confirmed Neymar posted a series of videos on Instagram in which he reflected on how he had come to this decision.

Noting that he was reading from a prepared text, he embarked on a spiel about his career at Barcelona, how he had played as Barcelona in video games as a kid, how he had made history by playing in that incredible front three with Suarez and Messi, how Messi was the greatest athlete he had seen in his life, etc.

Then the kicker: “I love Barcelona but an athlete needs challenges.

“And for the second time in my life I’ll contradict my papa. Papa, I understand and respect your opinion, but my decision is made and I ask you to support me as you always do.”

But was Neymar Senior really as against the move as Junior was making out? What Junior did not reveal at the time of this emotional message to Barcelona fans was that Papa’s commission for agreeing to the deal taking him to Paris would be €10.7 million.

Documents obtained by Football Leaks and passed to European media including Mediapart in France revealed that the total cost to PSG of signing Neymar was €252 million, including €10.7 million commissions for his father and the agent Pini Zahavi.

Most of Zahavi’s commission was to be paid in yearly instalments of €2 million over the five years of the contract, provided Neymar remained with PSG. But the payments to Neymar’s father were heavily front-loaded – with €6 million due in January 2018 and €3 million one year later.

Senior has therefore already pocketed most of the commission he earned as part of the deal. Is it a coincidence that Junior is now said to be unhappy in Paris and desperate to move back to Barcelona? Maybe. And maybe he wrote the text for that Instagram video all by himself.

The good news for the happy few that make their living off transfer commissions is that PSG are finally ready to get rid of Neymar. His signing has proved to be an utter disaster.

“I’d love you to ask me the value of Neymar in two years. It will be double at least,” PSG’s president Nasser Al-Khelaifi said at the player’s unveiling, in August 2017. This turned out to be even more wildly optimistic than Al-Khelaifi’s attempts to renegotiate PSG’s sponsorship deals after Neymar’s arrival.

PSG knew that Neymar’s net salary of €30 million would cost them €54.7 million a year, meaning the total cost of his five-year contract would come to more than half a billion euro.

They hoped to offset some of the cost by exploiting Neymar’s undoubted marketing potential. They knew that he was rated as the third-most commercially valuable athlete in the sport, after Ronaldo and Messi, and they believed that having such an asset at their disposal would enable them to demand more money from their own sponsors.

However, they soon discovered that Neymar was not especially keen to share the cash-generating powers of his image. He raked in millions from more than 30 contracts with personal sponsors – a commercial empire largely managed by Senior. As for PSG’s sponsors, he would only agree to the bare minimum of promotional work on their behalf, and would not even agree to refrain from doing personal deals with companies who were competitors of PSG club sponsors.

Al-Khelaifi’s efforts to squeeze the big sponsors for more money came to nothing. Nike had been a club sponsor since 1989 and their €25 million a year contract ran until 2022. Al-Khelaifi suggested a new deal at €100 million a year. Nike replied that this sum did not correspond with market value; the deal stayed as it was.

The other major sponsor was Emirates, whose €20 million a year contract was due to expire in 2019. Al-Khelaifi suggested a hike in price to €90 million a year. Emirates declined, and their 13-year association with PSG will end next week, as French hotel chain Accor takes over the sponsorship.

With revenues not growing as expected, PSG needed Neymar to repay them on the pitch. But he’s been missing in action. It’s not that he has played badly, exactly. It’s that he has got injured at the crucial moment in each season, so that he has played only one Champions League knockout match in two years.

Besides the bad luck, he has also increasingly left a bad taste. “His winning mentality, strength of character and sense of leadership have made him into a great player,” Al-Khelaifi said at the unveiling. “He will bring a very positive energy to this club.”

Far from showing a winning mentality and strength of character, he has become synonymous with diving and graceless losing. “Children throw themselves to the ground thanks to Neymar” was the withering comment of Spain’s World Cup-winning coach, Vicente del Bosque.

In leaving Barcelona for Paris, Neymar prioritised money, and money is what he has got. The rest of it – the prestige of playing for a great team, the joy of playing with the world’s best player, the thrill of competing for the biggest trophies – he’s lost. But these two unhappy years in Paris have been good for the financial future of his family, and for one family member in particular.

Al-Khelaifi gave an interview to France Football last week which was notable for the frosty tone he took when talking about Neymar. “Nobody forced him to sign, nobody pushed him in,” he said. If only we could believe that.

1 Leo Cullen: ‘It feels like it all came crashing down on top of us’
2 McDunphy stuns Roche to take gold at National Road Race Championships
3 Champions League draw: Manchester United handed tough draw on return
4 Dave Hannigan: How Christy Ring aroused the curiosity of American media
5 Lee Westwood fires flawless 62 to make the running in Scotland
Real news has value SUBSCRIBE
Crossword Get access to over 6,000 interactive crosswords