Benitez to leave Newcastle as months of talks break down 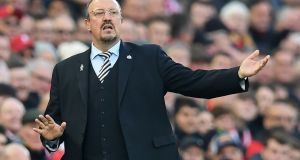 Rafael Benitez will leave Newcastle United after three years as manager when his contract expires next week. Photograph: Getty Images

Rafael Benítez will leave Newcastle United when his contract expires on Sunday, after months of talks aimed at extending his stay as manager reached an unsuccessful conclusion.

There was a predictably angry response from many fans when it emerged that Benítez’s stay would end after a little more than three years. It appears that Mike Ashley, who has been in talks to sell the club, declined to meet some of the Spaniard’s demands.

Benítez’s departure comes amid interest from the Chinese club Dalian Yifang, who have offered a contract worth a reported €13.5 million a year. The 59-year-old has said in the recent past that he sees his future in Europe, and ideally in the Premier League. His family live on the Wirral.

Newcastle confirmed Benítez’s imminent departure, and that of his coaching staff, in a statement. “It is with disappointment that we announce manager Rafael Benítez will leave Newcastle United upon the expiry of his contract on June 30th, 2019,” the club said.

“We have worked hard to extend Rafa’s contract over a significant period of time, however it has not been - and will not be - possible to reach an agreement with Rafa and his representatives.”

The statement did not detail the sticking points. Benítez wanted greater control of recruitment, including increased freedom to sign players aged over 25 and flexibility over the wage bill. That included a desire to purchase the striker Salomón Rondón, who did well on loan from West Brom last season but turns 30 in September. Ashley’s preference has been to bring in younger players with potentially high resale value.

The manager had also hoped to overhaul Newcastle’s training ground but seemed more willing to compromise on this.

Benítez’s discussions were conducted mainly with the managing director, Lee Charnley, and at the start of last month he had indicated that a contract extension might be within reach. He had sought a budget which would enable him to make Newcastle more competitive after seasons of finishing 10th and 13th in the Premier League, his ultimate aim being a return to the Champions League. He made only signing of more than £15 million (€16.8 million), that of Miguel Almirón from Atlanta United last January.

“We would like to thank Rafa and his coaching team for their efforts over the last three years and their significant contribution to what has been collectively achieved,” Newcastle said. “We would also like to thank our supporters, players and staff for their patience during a period of uncertainty. The process to appoint a successor will now begin.”

The bookmakers had José Mourinho, the former Birmingham City manager Garry Monk and the Manchester City coach Mikel Arteta among the early frontrunners.

Although Benítez’s exit brings some clarity at Newcastle, much remains unclear given Ashley’s attempt to sell the club for around £350 million (€390 million). He has been in talks with several potential buyers, including the Dubai-based Sheikh Khaled Bin Zayed al-Nahyan, who said last month he had “agreed terms”.

Newcastle have been for sale - either overtly or tacitly - for much of Ashley’s 12-year ownership but takeovers by Amanda Staveley and then Peter Kenyon evaporated after entering the due diligence stage.

Benítez is widely perceived to have overachieved at Newcastle. He took over from Steve McClaren in March 2016 with the club one point from Premier League safety with 10 games remaining. Relegation followed but Benítez took the club back to the top division as champions at the first attempt and seasons largely free of relegation worries have followed on a tight budget.

Some of Newcastle’s players thanked Benítez after his imminent departure was announced. The forward Ayoze Pérez wrote: “Thank you Rafa for all these years at Newcastle and good luck in the future! You are a top manager.”