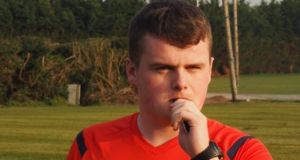 Harry McCann says he was intimidated while refereeing an underage game

The Football Association of Ireland (FAI) has received no report about an incident which an underage referee says led him to give up his role in the game.

A spokesman for the FAI said that it would welcome contact from the referee involved and would be contacting the league involved in relation to the alleged threat.

“The FAI condemns any threat of violence against a referee and will take action against anyone found guilty of any behaviour that threatens a referee, verbally or physically,” it said in a statement to The Irish Times on Monday.

To date, the FAI has received no report from the referee in question in relation to this incident or any previous incident. In such instances, the referee is instructed to report any incident to his own league, and, under new rules introduced following a serious assault on an official last year, the League is obliged to forward any report of an assault on a referee directly to the FAI’s Disciplinary Control Unit.”

The referee in question, Harry McCann, tweeted on Saturday that he would no longer be refereeing due to a threat of violence he alleged occurred at a game he was involved in that day.

Today I had an U13 soccer manager attempt to strike me while refereeing.

After 4 years of abuse and violent threats, I have to decided to call it quits.

The FAI do not care about the safety and wellbeing of referees, and I no longer feel safe being involved in the game. pic.twitter.com/oU3KQz65e7

Speaking to The Irish Times today, he said that he had reported both last weekend’s incident and a second incident to the secretary of his league and they had acknowledged receipt. The Kildare District Underage League has not replied to a request for comment.

Mr McCann said the incident occurred when a player received an accidental strike to the face when in contest for the ball against an opponent. Following that, a man who he believed to be associated with the opposing team became abusive and threatening, he said.

Mr McCann said that he asked the man to leave the field, and when he continued being aggressive and abusive, he told him to leave the ground. “Then he clenched a fist, took a step towards me and made a striking motion in my direction,” Mr McCann said, agreeing that it was a mock punch, and saying that he believed it was an attempt to intimidate him. The match was then abandoned, Mr McCann said.

He said he has informed the Kildare District Underage League of the incident and that he will no longer be refereeing matches in the league. He said that he previously made a report about another threat of violence he claimed took place at the end of March, which he believed had been referred to the FAI, as is standard practice when such an incident occurs.

However, he said that he has not been contacted by the FAI since then. “For all I know nothing happened, most likely something did happen, but to what extent, I don’t know,” Mr McCann added.

He said that he had lost patience with the FAI’s approach to protecting referees. “I’d like to see a similar approach to the IRFU, a zero tolerance approach. It’s mind-boggling that the IRFU can introduce a zero tolerance policy and have success and the FAI can’t do it”.

“I think there’s very little action being done to protect the safety and wellbeing of referees in this country,” he said. “I speak to refs on a weekly basis who have the same incidents and find the same things are happening. It’s often just minor abuse, but it can be threats of violence… it happens regularly enough,” he said.

“I don’t even think the league or the FAI flinch at that any more because it is so common.”