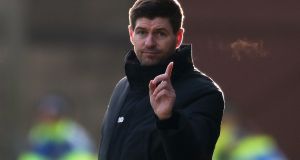 Rangers manager Steven Gerrard: “I knew before a ball was kicked there was a demand to win every fixture.” Photograph: Jane Barlow/PA Wire

Steven Gerrard should relish the brief calm that follows Glasgow’s unruly football storm. Rangers’ manager will oversee his 38th competitive fixture of the season – and last before a winter break – as Celtic visit Ibrox on Saturday.

Amid a kaleidoscope of emotions, including for Gerrard himself, it has been easy to forget this marks the Liverpool icon’s maiden campaign as a first-team manager.

“Nothing has surprised,” Gerrard said on Friday. “I knew before a ball was kicked there was a demand to win every fixture. I knew if we overperformed that supporters would get carried away and I also knew if we had a bump or a result that wasn’t in our favour, there would be an overreaction.”

From that statement, it should be easy to infer that Rangers’ position – three points adrift of Celtic, having played a game more – represents par for their manager. Gerrard is clearly comfortable within a professional environment which has played psychological tricks on others.

Yet there are intriguing subplots. The Rangers support, still giddy regarding the coaxing of an individual with Gerrard’s reputation, want so desperately to believe a meaningful challenge can be laid down to a Celtic side who have won seven leagues in succession. The same, depressingly, applies to elements of the Scottish media, for whom Old Firm jousting is a safe staple diet.

On-field reality suggests Gerrard should for now be content to establish his side as the clear second force in Scotland, a scenario not delivered since the financial meltdown of 2012. Whether through ego or an excitement of his own, the 38-year-old retains loftier ambitions. As things stand, Rangers are a point ahead of third-placed Kilmarnock.

“The club should always look to be at the top,” Gerrard said. “That was the message to me when I came in. That hasn’t changed. Obviously I knew the size of the task to do it in the first season; of course I did. But that doesn’t mean I wasn’t going to try and do it.

“I don’t know what the board will see as satisfying in terms of where we end up or what we achieve. For me, I want to try and win it. I am here to win; the league and everything else we enter. That’s my mentality and that will never change. I haven’t set off at the beginning of the season with any aims to try and be the second best. It is a case of aiming for the stars and see where we end up.”

Barring something extraordinary, Celtic will retain their title. They are odds-on to win at Ibrox, where Rangers have recently slipped up against Hibernian and Aberdeen.

That Gerrard has improved Rangers is obvious but there have been warning signs worthy of note. Rangers tamely exited the Europa League – albeit at the group stage – at the hands of a poor Rapid Vienna side who were subsequently trounced 6-1 in a city derby.

Aberdeen earlier saw off Gerrard’s men in a League Cup semi-final. Rangers’ recruitment, by way of resources second only to Celtic in Scotland, has been questionable.

Gerrard has not been slow to castigate his personnel, occasionally in victory. It must therefore raise a smile that an individual so intrinsically linked to his playing days swats aside the notion he struggles to manage those with a tiny percentage of his talent.

“My job is to help the players and to guide them and be there for them,” Gerrard said. “I don’t take my career or level and compare them to me. I’d get nothing out of that to be honest. I just try and be open and honest with the players. I have nothing but respect for all of them.”

Rangers’ derby hopes will rest upon their Colombian striker Alfredo Morelos. The 22-year-old, whose finishing has in the past been offset by petulance, has found the net 20 times this season. In six career clashes with Celtic, though, he has fired blanks.

Rodgers edged towards the territory of mind games when contemplating an inevitably curious Old Firm scene. Celtic will have only 750 supporters at Ibrox – Rangers took a similar number to Glasgow’s East End in September – with that situation, in theory, benefitting the hosts. Rodgers suggested the scenario was not clear-cut.

“My feeling always is that it is better in both grounds whenever both sets of supporters are there,” Celtic’s manager said. “However, they are not. But it can work for and against you as the home team in that situation, when you have predominately the support in the ground. It can add something to the players, either a positive or a negative.”