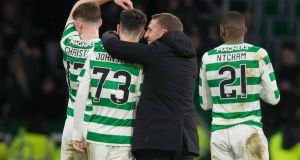 Mikey Johnston stepped up to the plate at Parkhead with a brace in Celtic’s 3-0 Ladbrokes Premiership dismantling of bottom side Dundee.

The 19-year-old winger, deputising for the injured Odsonne Edouard, the Hoops’ only recognised centre forward, opened the scoring with a drive in the 42nd minute of a one-sided match.

Johnston, making only his second league start this season after scoring off the bench against Motherwell in midweek, doubled his tally in the 50th minute with a header from close range.

Defender Filip Benkovic added a third in the 69th minute with a strike from 12 yards to stretch the Hoops’ lead at the top of the table to three points over Aberdeen with Rangers, a point behind the Dons, playing at St Johnstone on Sunday.

Brendan Rodgers’ side face Aberdeen on St Stephen’s Day before the Old Firm match against Rangers at Ibrox on December 29th, their last before the winter break, and this convincing win will have done confidence no harm at all.

As expected Rodgers tinkered with his line-up as goalkeeper Scott Bain replaced Craig Gordon and midfielder Tom Rogic came in for skipper Scott Brown, while midfielder Callum McGregor was handed the captain’s armband.

McIntyre brought Glen Kamara, Adil Nabi, Ryan Inniss, Benjamin Kallman and Andy Boyle into a side which were soon under pressure.

An angled attempt from right-back Anthony Ralston was pushed away by Dundee keeper Jack Hamilton, who soon afterwards blocked a Johnston shot from close-range with defender Nathan Ralph heading Scott Sinclair’s drive from the loose ball to safety.

Celtic’s momentum built and in the 12th minute Sinclair’s attempt from the edge of the box sped inches past the far post.

Five minutes later the Parkhead winger ended a driving run by cutting the ball back for Johnston whose volley from eight yards rebounded off the crossbar and the Dundee defence escaped yet again soon afterwards when James Forrest headed a Sinclair cross over the bar.

There was no breathing space for the Taysiders.

Hamilton was in the right place to gather Rogic’s shot and Johnston had two more efforts, one saved, one missing by inches but three minutes before the break he took a pass from McGregor, turned inside the box and drilled a low shot past Hamilton into the far corner.

Bain had to save a Jesse Curran drive just before the interval which offered Dundee the chance to regroup only to unravel again five minutes after the break when Johnston’s header from Sinclair’s cross went in off the underside of the bar.

Dundee had lost 5-0 to the Hoops at the end of October and another rout was on the cards.

Hamilton parried drives from Forrest and Ralston before Benkovic hammered in from 12 yards after the Dark Blues’ keeper had parried a shot from substitute Ryan Christie, on for James Forrest.

Johnston was given a deserved ovation in the 77th minute when he was replaced by Jonny Hayes and Celtic kept going forward.

Ralston beat Hamilton with an angled drive only to see the ball rebound off the post and Ralph cleared another Sinclair effort off the line before the final whistle ended a tough day for basement side Dundee, who ended up three points behind St Mirren.