Ballybrack player declared ‘dead’ was taken to hospital by mother 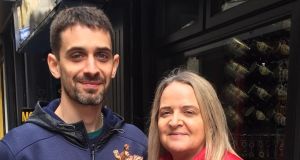 An amateur footballer who was falsely declared dead by his former club has spoken of his new-found fame in his native Spain after he hit headlines around the world.

Ballybrack FC, based in Dublin, was forced to apologise last month after someone from the club told the Leinster Senior League that Fernando Nuno La-Fuente had been killed in a traffic accident.

The side’s game against Arklow Town was postponed, while other teams in the league held a minute’s silence in honour of the player.

Ballybrack FC apologised and described the incident as a “grave and unacceptable mistake”.

Fernando has revealed that his new found celebrity status has extended to Spain, with the amateur footballer remaining the centre of attention after he returned to his family this week for the first time since false reports emerged that he had died.

“My mam [Amparo] works in the Town Hall in Spain and many of her friends came to my house to see me and speak with me over the past few days,” he said.

“We’re going to have a big party tomorrow [Christmas Eve] night and about 30 members of my family will gather together.”

Fernando, who was a special guest on Paddy Power’s Christmas Cracker, also revealed that his mother took him to the local medical centre for a full check-up after the Ballybrack incident.

He explained how his mother whisked him straight from the airport to the hospital when he landed back in his native country.

“She took me first to the dentist and then to the hospital,” he continued.

“Everything was okay. I tried to tell her I was fine but she wanted to see it with her own eyes.

“After it, she bought me a hot water bottle to bring back with me to Ireland. ”

In a statement posted on Facebook last month, the club said: “It has come to the attention of both the club, senior players and the management team that a gross error of judgment has occurred emanating from correspondence sent from a member of the senior set up management team to the Leinster Senior League.

“This grave and unacceptable mistake was completely out of character and was made by a person who has been experiencing severe personal difficulties unbeknownst to any other members of the club.”

It added: “At this stage we can only offer our sincere apologies to the Leinster Senior League, our opponents Arklow Town FC and the host of clubs and football people who made contact with us or offered messages of support in recent days.”

The club escaped expulsion from the Leinster Senior League but was sanctioned.

The individual who issued the false report was also sanctioned. – PA