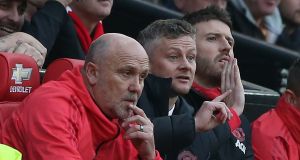 In Ole Gunnar Solskjær’s opening two matches the feel-good factor has been mainlined back into Manchester United.

Following the dark José Mourinho days this was a prime demand when appointed caretaker manager last week. The second was to win and do so in fine style: again, this has been achieved. Saturday’s 5-0 victory at Cardiff City was followed by St Stephen’s Day’s 3-1 defeat of Huddersfield.

All of this has been done with the appearance of ease, despite some reticence being understandable from a man who was air-dropped in, 17 games into this listing United season, with the club 11 points from a Champions League berth. Solskjær might have assessed the near-wreckage left by Mourinho and wonder just how he, who took Cardiff down in May 2014, could turn the United tanker around.

Instead, he has two wins out of two, Paul Pogba reinstated and firing, and though United stuttered at times against Huddersfield, the football has been more fluid and high octane.

Against Huddersfield Solskjær was without the ill Anthony Martial, his top scorer, yet ended witnessing a two-goal Pogba masterclass that followed the Frenchman’s fine display in south Wales.

The afternoon began as a coming-home party for the new interim boss as Alan Keegan, the stadium announcer, said: “Will you please welcome back the legend: Ole Gunnar Solskjær. ”

This drew cries of “Olé! Olé! Olé!” from a packed Old Trafford who hoped to witness further distance between United and Mourinho’s blighted 30-month tenure.

Solskjær’s return was a quasi old-boys reunion as Ryan Giggs applauded him from the posh seats and Wayne Rooney tweeted a picture of himself at Old Trafford, pre kick-off.

Solskjær admitted after a win that also featured a rare Nemanja Matic strike – from close range – that he has had limited time to tinker. It is his good fortune his early run of fixtures are particularly kind, as Bournemouth are next at United’s stadium – for Sunday’s late game – before a trip to Newcastle United on January 2nd, and the visit of Reading in the FA Cup third round.

So, the next three matches are eminently as winnable as the opening two and can allow Solskjær to build a crucial component he neatly said post- Cardiff cannot just be taken from the “fridge” – confidence – before what appears to be their first stern test: the meeting with Tottenham at Wembley on January 13th.

By the half-hour mark in south Wales United were 2-0 up. Against David Wagner’s bottom-placed side the game was goalless approaching that time and a concerned Solskjær had been in the technical area giving Juan Mata instructions, before returning to his seat to see Matic’s opener.

This came from a corner and illustrated one big difference from Mourinho’s reign: United’s approach is more direct. Add to that, Solskjær’s XI are a crucial fraction faster and his players more ready to try some schoolyard stuff – as when Marcus Rashford nutmegged Mathias Jørgensen and fired in a cross that Diogo Dalot might have smacked home on the volley.

Also of note in the opening 180 minutes of Solskjær’s spell is how Mike Phelan, the No 2, is often left to do the touchline tactical detail when required. He hovered in and around the area for the start of the second half against Huddersfield and remained there for a prolonged period.

What he – and Solskjær – saw was United make a brief return to the disjointed stuff that doomed Mourinho before Pogba took command. More cheer for the pair – plus Michael Carrick, another member of the Solskjær brains trust – came in how Jesse Lingard was willing to race back and help his defence whenever Huddersfield threatened.

As Pogba was scoring his sixth and seventh goals of the season – one more than all of last season – out came renditions of: “Who put the ball in the Germans’ net? Ole Gunnar Solskjær; and “You are my Solskjær”.

Old Trafford had became bonhomie central. The Stretford End demanded and received a wave from Phelan and Carrick. Mata got a hearty Solskjær hug when coming off. The 18-year-old Angel Gomes was brought on for his second Premier League game, at 3-0: material evidence that Solskjær is keen to carry forward the United tradition of developing youth. And, there was even a run-out for Fred, the midfielder who came to embody Mourinho’s dysfunctional tenure. He was the £50m buy whose creativity could only be afforded if United were more defensive – for that was the Portuguese’s seriously off-message verdict on the sole major summer signing.

Solskjær, so far, has been as faultless in front of the media as his team has been on the field. There is an excitement and authority when speaking that stems from his bona fide hero status at United. The trick now is for him to reach May with the same billing. Do this and Solskjær may yet be a serious contender for the permanent role.