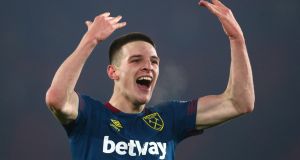 The 19-year-old midfielder, who has made 51 first-team appearances for the Hammers, has signed new terms until 2024 with the option of a further year.

The news comes as a major boost to West Ham after Rice turned down their initial offer earlier this season.

His previous contract was to expire at the end of next season sparking fears the club could have lost one of their brightest talents for nothing.

Joint-chairman David Sullivan said: “Signing Declan to a new long-term contract is something we have been planning for and working round the clock on and I, the board, the manager and Declan himself are all very happy that everything has now been completed.”

Rice, who can also operate at centre-half, put in another commanding defensive midfield performance as West Ham came from behind to beat Southampton 2-1 on Thursday night.

The sought-after youngster is also at the centre of an international tug-of-war between the Republic of Ireland, for whom he has been capped, and England, where he was born.

Rice said: “I’m absolutely delighted to have got the contract done, signed and to commit my future to the club until 2024. I’m absolutely ecstatic”.

“Without a doubt, the plan was always to stay at West Ham. I’ve had the support from the fans, from the players and from the manager and now, to get it done and commit myself to this club is a very special moment.

“I’m still young, so to put more years on my contract and keep developing here is the best thing for me to do now. With the support of the manager, the players, everyone, it was the right thing to do.”