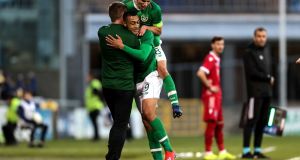 Stephen Kenny declared himself satisfied with the first match of his Under-21s tenure as the Republic of Ireland breezed past Luxembourg at Tallaght Stadium in their opening Euro 2021 qualifier.

Adam Idah marked his debut at this level by collecting a brace either side of Neil Farrugia’s tidy finish. The biggest crowd since 1995 for an Under-21 match, 4,772, turned up to see Kenny begin an international managerial career which is due for an upgrade to senior level next year.

“When we led 2-0 at half-time, we spoke about winning by five goals,” said Kenny afterwards. “It was an excellent all-round performance although, with Italy, Sweden, Iceland and Armenia also in the group, we will have sterner tests ahead.”

Ireland should have been ahead after only seven minutes when Idah scampered clear only to ripple his shot into the side-netting.

Apart from Kenan Avdusinovic’s tame shot which was easily saved by Caoimhin Kelleher, Luxembourg created little in the final third.

Instead, Ireland got a foothold and soared ahead on 34 minutes. Neil Farrugia’s corner-kick was telegraphed perfectly for Idah to attack the near post and steer his header into the top corner.

It wasn’t long before the visitors were dissected again. Man of the match Connor Ronan did the spadework by advancing at pace and his slide-rule pass was finished by Farrugia’s deft dink beyond the stranded goalkeeper.

Ireland dominance continued after the break and a similar break by Ronan led to the third. Idah was the recipient this time, haring clear from the break and burying his low shot beneath Tom Ottele for the third.

Jayson Molumby, who alongside Conor Coventry bossed the midfield, had earlier almost embarrassed the Luxembourg goalkeeper by attempting an audacious lob from 35 yards which clattered off the crossbar.

Ireland could have added more goals to their tally, with Ronan, Molumby and Zach Elbouzedi spurning chances but the result was already wrapped up.