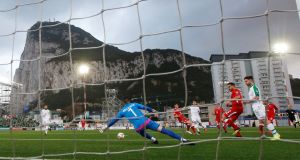 Jeff Hendrick scores the Republic of Ireland’s winner against Gibraltar in the Group D qualifier at the Victoria Stadium, Gibraltar. Photograph: Peter Cziborra/Reuters

Perhaps the timing of their press release on Saturday night suggests the FAI believed that a comprehensive win at the Victoria Stadium was going to set the tone for a governance story they were seeking to sell as good news.

Like John Delaney’s internal redeployment, though, Ireland’s narrow victory felt like a small step forward but one that leaves big questions to be addressed over the coming days.

Few things in life or football are as predictable as a manager’s reaction to a result like this, though, and Mick McCarthy was entitled to declare, as he did, that a win is a win in the particular circumstances. Still, for all the challenges presented by the gale force winds and plastic pitch, Ireland did play pretty poorly and Gibraltar might well have nicked a draw.

The wind, to be clear, was terrible and so controlling the ball on the artificial surface proved problematic from the outset. There were short spells, however, when the hosts, part-time professionals or not, seemed to handle it better.

For the most part, of course, Ireland did dominate. There was a discernible effort to play the ball out from the back, to poke and prod at the flanks of a heavily manned Gibraltar defence. The problems began in the final third where the locals succeeded in making life difficult and the visiting side’s lack of attacking bite was there for all to see.

David McGoldrick was a lively and inventive presence who came close to scoring a couple of times before eventually teeing up Jeff Hendrick for the game’s only goal four minutes after the break. Sean Maguire will regard this as another opportunity missed, however, with the Preston striker failing to make any real impression.

He might well point to the lack of quality balls into the box and McCarthy certainly acknowledged that as an issue with the manager admitting afterwards that the decision to play Matt Doherty in front of Seamus Coleman had not proved anything like the success he had been hoping for.

“I’m not dismissing doing it again,” he said. “But did it work? It wasn’t a rip-roaring success in terms of how much we got out of it. I’m not giving the ‘Doc’ any grief. I chose to play him there and he did what was asked of him. And we didn’t get that much from anybody else, to be quite honest.

“He had a little bit of joy in the first half with Seamus doubling up. Other than that it didn’t work, so there was a substitution. I was just looking for a few more crosses, I guess.”

Conor Hourihane’s set pieces, primarily a couple frees from the left, provided Ireland’s best chances before the goal but Ireland possessed neither the speed nor the creativity to really open up a determined defence which, predictably, consisted of almost the entire home team at times. That is clearly a concern ahead of Tuesday’s game against Georgia.

Also a worry is the fact that Gibraltar might well have scored. From a corner, Roy Chipolina forced a save from Darren Randolph that had McCarthy handing the goalkeeper his own, imaginary, Man of the Match award afterwards.

Not too long after that, Richard Keogh had to throw himself in front of a shot by Liam Walker that then looped high and into Randolph’s arms.

Shane Duffy’s most memorable moments came at the other end with the Derryman twice coming close to getting his forehead to crosses that seemed set to produce a goal.

Kyle Goldwin must have been relieved on both occasions but the local goalkeeper had done well on the one occasion he was really required to with the home side’s captain, Chipolina again, almost heading into his own goal after Coleman had produced one of the game’s few crosses to really put the home side’s retreating defenders in a genuinely difficult position.

McCarthy would later express the hope that if Gibraltar have more days like this, on days like this, they just might succeed in getting a result against one of Ireland’s rivals for a top two spot but it is also entirely possible that Saturday will be as good as it gets for them against one of the group’s top three sides.

Georgia look a much more likely stumbling block for the aspiring qualifiers in this group and Ireland have previously ridden their luck against them on a couple of occasions.

“I was watching their game [a 2-0 home defeat by the Swiss on Saturday afternoon],” said McCarthy. “Switzerland went and pressed them and pressed them well and they didn’t have as much possession and couldn’t get up the pitch.

“But I’ve seen in other games where they’ve played . . . Switzerland are a good team. They are one of the best teams in Europe – they have been over the last couple of years, I think the results they’ve had. So it’s no surprise they’ve gone there and won.”

Ireland would settle right now for being an improving one again after the miserable year they had last year but in the bulk of the games ahead they will have more to contend with than the weather and pitch when it comes to passes completed and possession kept.

If McCarthy really can get much more out of them, he will be hoping for more significant signs of progress in the first home game of the campaign.

1 Reality Bites – Tales from the new normal: Caitríona Cormican
2 Nicholas Quinn: ‘Swimming became how I dealt with grief’
3 Ian McKinley: ‘You do take for granted the simple things in life’
4 A beautiful, happy accident - Moneyball is the best sports movie ever
5 Karen Robinson Walton: I am looking at him. I say ‘Benjamin, what have we done?’
Real news has value SUBSCRIBE
Crossword Get access to over 6,000 interactive crosswords