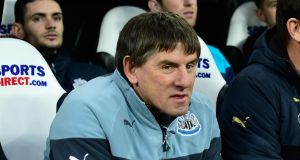 Peter Beardsley has been charged by the Football Association with three counts of using racist language to players. Photograph: Stu Forster/Getty

Peter Beardsley has been charged by the English Football Association with three counts of using racist language to players in his former job as Newcastle United’s Under-23 coach.

The former England international, who left Newcastle this month following a 14-month period of gardening leave, vehemently denies the claims and is expected to contest the charges. If so, his case will be heard by a three-person independent commission.

Beardsley has been seen regularly at St George’s Park in recent months and recently completed his A coaching licence but huge questions were left unanswered when Newcastle announced his departure yet declined to reveal the results of their 14-month investigation into allegations of bullying and racism from Under-23 players.

Kick It Out, the anti racism group, said it was “concerned” Newcastle had not been more explicit and the FA intervened to investigate several complaints, including one of bullying from the club’s former midfielder Yasin Ben El-Mhanni, a Londoner of Moroccan origin. El-Mhanni was released by Newcastle last spring and the other players who complained about Beardsley almost all left St James’ Park at around the same time.

An FA statement said: “It is alleged Mr Beardsley used abusive and/or insulting words towards Newcastle United FC Under 23 players, which were contrary to FA Rule E3(1), whilst employed as their coach.

“It is further alleged these words also constituted an ‘aggravated breach’, which is defined in FA Rule E3(2), as they included reference to ethnic origin and/or colour and/or race and/or nationality.”

The 58-year-old, who, during his second incarnation in the role, had coached Newcastle’s Under-23s since 2009, has until April 12th to respond.

If an independent panel upheld the charges, it is understood the most likely punishment would involve a five-game ban from footballing activities which would take effect when Beardsley began any new role. He would almost certainly also be asked to attend a diversity course.

After his St James’ Park exit, Beardsley, who made 326 appearances for Newcastle and ranks as one of their all-time playing greats, said the “time was right to seek a new challenge”.

At a public speaking event – “an evening with Peter Beardsley” – in Gateshead last weekend he told the audience: “I am not a bully and I am not a racist. Everbody in the city of Newcastle has been amazing, for 15 months they’ve been amazing. I know what I am, everyone who knows me, my friends, my family, know I am. I’m comfortable with what I am.”

During his first stint working with Newcastle’s junior players between 2001 and 2006, Beardsley was cleared by a Premier League investigation into bullying allegations made by three players. In 2006 Glenn Roeder, Newcastle’s then manager moved Beardsley into an ambassadorial role but he returned to the academy three years later.

On finally leaving Newcastle this month Beardsley issued a statement through his solicitors in which he said: “I have always honoured my contractual obligations of confidentiality to the club and maintained my silence, which has in itself been very difficult.”

Newcastle, meanwhile, said they were “grateful for the contribution Peter has given over the years as a player, coach and ambassador and we wish him well for the future”. - Guardian service