Wayne Hennessey excels as Wales hold on to beat Slovakia 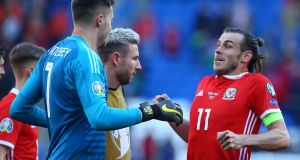 It was anything but convincing and there were plenty of anxious moments for Wales to endure on an afternoon when Slovakia will wonder how they failed to score but all that matters for Ryan Giggs and his players right now is that their qualification campaign is up and running with a victory. Daniel James provided the game’s defining moment when he enhanced his burgeoning reputation by marking his first competitive start for Wales with an early goal.

The 21-year-old was the outstanding player on the pitch and it was a wonderful piece of opportunism that led to that crucial breakthrough as James picked the pocket of Peter Pekarik, the Slovakia right-back, who must have breathed a huge sigh of relief when Giggs withdrew the Swansea City winger with a little under 20 minutes remaining.

Wales had lost their way by that stage as Slovakia started to control the game, prompting Giggs to bring on Ashley Williams, who had been left out of the starting lineup because of his lack of game-time at club level, to strengthen a defence that was looking increasingly stretched. Ultimately, though, Wales were indebted to Wayne Hennessey as much as anyone.

The Wales goalkeeper made several excellent saves, with the pick of them the reflex stop that kept out a point-blank header from Michal Duris, a Slovakia substitute. When David Hancko missed his kick from six yards out seconds later it rather summed up Slovakia’s day. “It was nervy at the end,” admitted Giggs. “We didn’t really punish Slovakia enough in the first half and you wonder if that will come back to haunt you. Second half we were under pressure and we had to defend. That includes everyone, also the goalkeeper.

“A couple of times we could have kept the ball better and made better decisions. We’ll learn from it and hopefully it will stand us in good stead going forward.”

With a double-header away against Croatia and Hungary to come in June, it was imperative that Wales won here, particularly as Slovakia already had three points on the board. Giggs admitted “there was a bit of pressure on us” in that respect and, with that in mind, it was a bold call for the Wales manager to leave out Williams, his captain, especially as Aaron Ramsey, another experienced player, had been ruled out with a thigh injury.

The expectation beforehand was that a callow Wales team – seven of the starting XI came into this match with fewer than 10 caps to their name – would look to Gareth Bale for inspiration, yet it was James who took centre stage. Playing wide on the left and capable of going past his man on the outside or inside with his searing pace, James threatened to make something happen whenever he had the ball.

“He’s brought his club form on to the international stage,” said Giggs. “I’m delighted because his overall game was fantastic and to top it with a goal was great. He was just a threat all day. He will be with that pace but he’s got much more as well. He can go either side, he’s intelligent, he works hard. He is a talent and when you have got that raw pace you are a threat at any level.”

The game was only five minutes old when James scored. David Brooks worked a lovely one-two with Harry Wilson on the right before cutting inside and trying to find Bale. His pass was actually a poor one and easily cut out by Pekarik but the Slovakia defender wanted far too long on the ball and James was on to him in a flash, pinching it off his toe with one touch and thrashing a low shot from 20 yards under Martin Dubravka, the Newcastle goalkeeper, with his second.

Although Wales looked the more dangerous team in the first half – Brooks swept a left-footed shot into the sidenetting and curled another effort narrowly wide – the complexion of the game changed in the second. Wilson squandered a presentable chance to give Wales some breathing space when he placed a left-footed shot wide after James had set off on another of those raids down the left, but it was Slovakia who looked the more likely to score.

Hennessey, dashing off his line to narrow the angle, blocked Albert Rusnak’s shot with his face and three minutes later denied Robert Mak, who should have done better as he ran on to Marek Hamsik’s clever reverse pass. Then came that superb instinctive save to repel Rusnak’s header and Hancko’s glaring miss. There was one more reprieve for Wales when Pekarik headed Hamsik’s deep cross into the sidenetting.

1 ‘Manchester United are lucky to have you’: Klopp responds to Donegal schoolboy’s letter
2 Liam Toland: Larmour can distract England while others flourish
3 Solskjaer complains about Molten balls after Brugge draw
4 This month a decade ago, football and Dublin changed course
5 Cian Healy’s hunger for battle undiminished by the years
Real news has value SUBSCRIBE
Crossword Get access to over 6,000 interactive crosswords