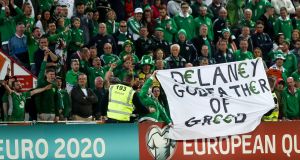 Republic of Ireland supporters with an anti-Delaney banner at the qualifier against Gibraltar at the Victoria Stadium in Gibraltar. Photograph: James Crombie/Inpho

Gibraltar versus Ireland must be in the running for the distinction of least-watched Ireland qualifier of the TV age.

The sensational rumour that John Delaney might be about to quit the FAI had started to circulate shortly before the match. By the time the players took the field the hive mind was in full cry and it was difficult to take your eyes off the constantly updated on-screen stream of speculation and hilarity.

The opening episode in the Delaney saga of the last week had illustrated the difficulties traditional media face in getting stories into the public realm. In order to report their story about a €100,000 payment by Delaney to the FAI in April 2017, the Sunday Times first had to overcome Delaney’s late legal challenge in the High Court.

The risk of catastrophic costs if things go wrong in the courts deter investigative reporting and create a powerful incentive for media companies to err on the side of caution.

No such considerations exist as yet in the semi-private world of WhatsApp. Ireland has always been a land of squinting windows and twitching curtains. But now the national propensity for gossip has been amplified and accelerated by the most powerful rumour-spreading tool known to humanity.

On balance, this has been a very good weekend for the game in Ireland

It’s too soon to grasp the full implications for civilisation of this development, but it’s already clear that all of the big stories in Irish life now play out in two parallel worlds.

There is the “official”, legally-defensible story, as reported in the mass media. And then there is the far more lurid and exciting version of the story that develops via WhatsApp and other private social media – an open-source user-generated drama made up of forwards and screengrabs and gleeful messages that start off “this goes no further” from people who know people who know people.

Maybe the biggest (and certainly the most entertaining) story in Irish football last year – Stephen Ward’s inadvertently-viral account of the trouble between Roy Keane, Harry Arter and Jon Walters – was birthed entirely from the medium of WhatsApp.

Ward’s voice message inspired imitations and parodies, in which people recounted entirely fictitious stories about public figures just to see how far they would spread. And spread they do, no matter how absurd or outlandish, because information tends to come to people on WhatsApp from other people they know and trust, they’re more likely to believe it.

It’s difficult for established media to compete, subject as they are to libel laws which were already archaic before the new media arrived to make a complete mockery of them.

The more sensitive and controversial the story, the bigger the gap between the official and WhatsApp versions. When the rumours start to fly nobody really knows if any of them are true, and nobody really cares either, because the guiding principle of this kind of story-formation is not accuracy, but entertainment.

By the time the Gibraltar match was over the rumour network had been in full swing for a couple of hours. No matter that the basic notion of Delaney actually walking away from this job always seemed somewhat implausible, great swathes of the population were now convinced that his 15-year reign as the dominant figure in Irish football was over.

The truth, as finally confirmed by an FAI statement at 7.33pm on Saturday evening, was more complicated.

Delaney had stepped aside as CEO but taken up the new position of executive vice-president, “with responsibility for a range of international matters and special projects on behalf of the FAI”.

Delaney thus retained the senior position within the FAI without which he would be unable to continue as a member of Uefa’s executive committee, work for which he earned a salary of €160,000 last year.

At this point it is difficult to say how much of his former influence and authority he will retain in the new role. The FAI have said that Delaney’s new “salary is substantially less than the salary he previously received as CEO,” but although it is understood to be in the region of €120,000 there has, as yet, been no confirmation of the numbers.

And the hundreds of thousands of Irish football fans who hope that the shake-up heralds a revolutionary change in the administration of football in this country should probably stall the celebrations until we know who will be replacing Delaney as permanent CEO.

On balance, though, this has been a very good weekend for the game in Ireland. To use the football euphemism, there was a sense that Delaney had taken the association as far as he could.

The Sunday Times’ story yesterday that the FAI had for several years been paying Delaney’s rent to the tune of €3,000 a month only added to the impression articulated by Fine Gael TD Noel Rock last week: that Delaney has been making a “Rolls-Royce” living but not delivering Rolls-Royce performance.

His time at the top lasted longer than most of us expected or perhaps feared, but nothing lasts forever.