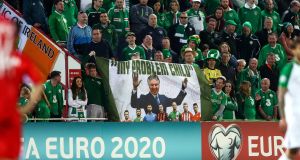 Why is John Delaney in the news?

This isn’t a question just for today or yesterday or last Sunday or whenever. Neither is it an inquiry, nor an attempt to tease out the particulars of the latest kerfuffle. It’s a much more basic thing, maybe even a more philosophical matter than all that.

Delaney is – was – the chief executive of a mere sporting organisation. Not a president or a prime minister, not elected to anything. Not a player or a pop star or a social media millionaire.

He didn’t invent anything – although did claim that after he brought Michel Platini to Croke Park for a hurling match, the then Uefa big knob went away and came up with the wheeze of putting officials behind the goals at soccer matches, so taken had he been with the umpires. So maybe he gets an assist on that one.

Still though, if you sit down and actually think about it, why should anyone outside soccer circles have to spend any of their time hearing about John Delaney?

He’s just, when it comes down to it, a dude in a suit, a name on a letterhead. There’s nothing sexy about being the head of the FAI. It’s an admin role, the sort of gig a boring but ambitious club treasurer ought to be striving for as his life’s work.

Soccer here is a big sport in a small country so it would be obviously incorrect to call the person in that job an irrelevance. But if, for pig iron, we put that label at one end of the spectrum and being splattered across the front and back pages of every Sunday newspaper (again) at the other, we have a reasonable range in terms of the sort of public profile and FAI CEO could have.

So where would it make sense for your average jobbing functionary to be found? Quietly pushing the rock up the hill for a sport that faces huge structural, financial and operational difficulties? Or fist-pumping down on the pitch and throwing his tie into the crowd after a match?

Out in the world fighting tooth and nail for the country’s only self-contained professional sports league? Or singing an IRA song in a late bar a few months before an England match and then denying it through the FAI and then apologising for it?

Nobody’s saying he should be invisible. That’s not the gig. Big-wig administrators attain a public presence just by getting the job. It’s unavoidable, whether they like it or not. Some, like GAA director general Tom Ryan, arguably go much too far in the other direction and eschew the spotlight to such an extent as to be accused of a lack of leadership.

Certainly, Ryan missed a trick last summer when a series of controversies came and went with him working assiduously to fix them in the background without assuming any clear and obvious public position. For all that it’s an admirable personal trait to be all about the work and to be determined to deflect the glory, the job has a lightning-rod aspect to it too. You have to be public property to some extent.

Because of the FAI’s history, we tend to take it as read that the next crisis is never all that far away. But they’re just a sports body, that’s all. Their concern is the day-to-day running of leagues, the appropriation of funds and the employment of the right personnel to run the national team. It sounds boring. It should be boring.

Outside of what happens on the pitch, there’s no good reason the FAI should routinely come with drama attached. Frankly, it’s weird that it happens at all. John Delaney would presumably point out that he doesn’t go looking for drama and yet, during his time in charge, it had an uncanny knack of finding him.

Or if not drama, then melodrama in the shape of John The Baptist documentary a few years back. Seriously, who does that? What leader of a sports body in a tiny country so much as gives a second hearing to a pitch for a documentary celebrating them in all their glory?

And how alone and detached do you have to be at the top of your organisation for nobody to grab you by the lapels and inform you of how moronic you will look when it comes out?

The awful truth is that nobody is terribly interested in John Delaney. Irish football isn’t about him. The bit of it that most of the country is interested in is about him least of all. Except when he is interviewing Steve Staunton for a job.

The make-up of the national team at any given stage is an accident of timing and luck. We hand over the development of everyone who plays in an Ireland jersey to the structures, culture and professionalism of another country. If they come back intact, we have a chance. If a few of them happen to be born around the same time, we have a decent chance. The rest of the time, we go granny-hunting.

When it goes wrong, the FAI have a responsibility to bear, one that goes back long before John Delaney was in the chair.

When it occasionally goes right, nobody ever mistakes it for a great FAI plan coming to fruition. One way or the other, you’d imagine the job would be one of keeping the head down and pushing gamely on to try and fix the many ills that beset the game here. It’s slow, grim, generally unrewarding work and almost none of it is newsworthy.

So why is John Delaney in the news?