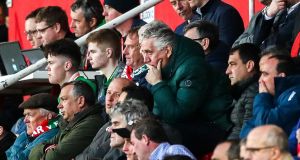 John Delaney has been replaced as chief executive of the FAI more than 14 years after he was appointed to the post with the association naming its chief operating officer, Rea Walshe, to succeed him in the role on an interim basis while the organisation looks to fill the position on a longer term basis.

Delaney is to be moved to a newly created role of “executive vice president” a post in which he will apparently have responsibility for “all FIFA and UEFA matters including membership of the UEFA Executive Committee, all FAI tournament bidding projects, international relations and support, the John Giles Foundation, membership of the Board of the Aviva Stadium, planning for the centenary of the FAI and the 50th anniversary of women’s football in Ireland in 2023 and a bid to host the UEFA Women’s Champions League final in Dublin.”

It is a pretty long list but it is very hard to avoid the conclusion that the move still represents a demotion after more than a decade and a half of having effective control of the day-to-day running of the entire organisation.

The move comes amid hugely increased scrutiny of his financial relationship with his employer after it was revealed last weekend that he had written a cheque for €100,000 to the association in April of 2017. It was also reported that he subsequently invoiced the organisation for a similar amount two months later.

The FAI issued a statement last weekend in which it claimed that the money had been a loan from its chief executive at a time when it was suffering an acute cash flow problem. But questions have been asked since about why an organisation with a turnover of €50 million and banking facilities to match, would have to borrow a six figure sum from an employee and why, if it did, the transaction was not recorded in its annual accounts for that year.

The fact that Delaney had tried, but failed, to obtain a High Court injunction preventing publication of the story about the €100,000 also attracted considerable interest. The action is believed to have left the 51-year-old facing a legal bill of some €50,000.

Neither that story nor the suggestion that there might be more to come was even referenced in a statement of nearly 2,000 words from the association which said that the decision to move Delaney out of the chief executive role had been prompted by a review of its management structures conducted by Jonathan Hall, a former director of governance and director of football services with the English FA.

Nor is it explained why Hall has recommended that Delaney be moved out of his current role, what has prompted the board to agree to remove him from a role they suggest he was doing well or what the urgency is about implementing the change.

In his report, which was apparently adopted by the association’s board on Friday, Hall recommends that: “The new Chief Executive would assume responsibility for leading and managing the executive team at the FAI with appropriate executive support being provided to the Executive Vice-President to carry out the role. Both roles should be clearly defined and would report into the Board.

Neither person, it says, will actually be a member of the board.

On the face of it, the move would seem to be a significant setback for Delaney who will have to work under somebody while losing his place on the association’s key decision-making body. It would seem peculiar that somebody who has repeatedly claimed down the years, when questioned about his salary, that he had well paid alternatives to go to if he so desired, would actually accept such a redeployment, or that his long-term replacement as CEO really would want him in the role.

The part of the statement in which the association’s president, Donal Conway, pays tribute to Delaney’s contribution down the years certainly has a certain air of finality about it, despite the fact that a change of roles rather than his departure is being announced.

“On behalf of the Board and the members of the Association I want to thank John for everything he has done for the FAI and for Irish football,” he says. “He has transformed how we operate as an Association.

“This new role will allow John to utilise his vast experience and connections in the world of football,” it continues, however, “and will best serve the FAI as we look to the future and our new strategic plan for Irish football which is currently a work in progress. We have now adopted the recommendations of Jonathan Hall’s report and will begin the process to appoint a new Chief Executive Officer.”

For now, though, Walshe, who joined the association in 2014 from Liberty Insurance, but who was only promoted to her current role from corporate affairs and licensing director a month ago, will take on the top job.

1 Tipping Point: Eddie Jones’s rhetoric is out of place in a febrile political climate
2 Maguire and Martial head Manchester United past Chelsea
3 Eddie Jones continues to revel in putting rugby’s nose out of joint
4 Rory McIlroy heads for Mexico with ‘WGC slam’ in sight
5 Andy Farrell recalls 13 players to Ireland squad ahead of England clash
Real news has value SUBSCRIBE
Crossword Get access to over 6,000 interactive crosswords