City still fighting on all fronts after FA Cup drama 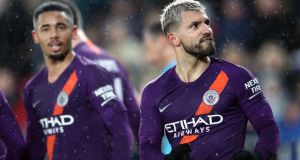 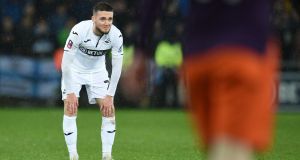 City trailed as late as the 69th minute to a Matt Grimes penalty and a beauty from City old boy Bersant Celina.

But three goals in 19 minutes — from Bernardo Silva, a Kristoffer Nordfeldt own goal and substitute Sergio Aguero — kept City on course to win four trophies this season.

Two of City’s goals were mired in controversy. A soft penalty brought the equaliser, with Aguero’s spot-kick striking the post and hitting Nordfeldt on the way out, and the Argentina striker looked to be offside when he headed home the winner two minutes from time.

However, with Swansea in the Championship these days, the Video Assistant Referee system was not in place at the Liberty Stadium and the incidents were unable to be checked.

Swansea are 15th in the Championship and with a very fresh-faced squad, but they gave the Premier League champions an almighty scare.

Graham Potter’s side came within 21 minutes of producing one of the FA Cup’s greatest shocks and reaching their first semi-final for 55 years.

The Swans pressed high to win possession, a risky strategy given City’s ability to bypass opponents quickly and reach the penalty area in a matter of seconds.

Swansea carried their own counter-attacking weapon, with Daniel James’ pace troubling both Kyle Walker and Nicolas Otamendi in one devastating burst.

But it was still a surprise when Swansea took a 20th-minute lead, Connor Roberts accepting Mike van der Hoorn’s diagonal ball to induce a rash challenge from Fabian Delph.

Grimes swept home the spot-kick for only his second Swansea goal in over four years at the club, and it soon got worse for City.

Swansea put together a delicious move from back to front with James again heavily involved.

The Wales winger fed Nathan Dyer and his pass was swept into the top corner by Celina, who made four City appearances before being shipped out twice on loan and eventually sold to Swansea last summer.

David Silva somehow missed from a yard out and the suspicion grew that this was not to be City’s day when Gabriel Jesus prodded wide after the restart.

City sent on Raheem Sterling and Aguero as their situation became increasingly perilous.

But Roberts mis-kicked in his own penalty area to allow Aguero a sight of goal.

Aguero’s effort struck Jay Fulton flush in the face but the ball found its way to Bernardo Silva and he flashed an unstoppable shot past Nordfeldt with the outside of his foot.

Swansea came under fierce pressure and City were fortunate after 78 minutes when Sterling tumbled under Carter-Vickers’ challenge.

Aguero’s spot-kick struck the post and hit Nordfeldt before crossing the line for an unfortunate own goal.

Nordfeldt pulled off an amazing double save to deny Jesus and Aguero, but Swansea’s reprieve was short-lived.

The excellent Bernardo Silva crossed and Aguero evaded both defenders and a linesman’s flag to stoop and conquer at the near post, sending City into the last four of the competition.