A crowd of 28,987 watched Spurs’ under-18 side beat Southampton in trial event 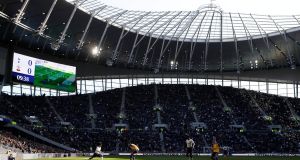 A general view of the new Tottenham Hotspur Stadium during the match between Tottenham and Southampton in the Under 18 Premier League, a test event ahead of the opening of the stadium. Photograph: David Klein/Reuters

One word: Wow. Tottenham fans have had to wait for the delivery of their new stadium – goodness knows they have had to wait. The delays have scarred the season, creating an unsettling limbo and driving the manager, Mauricio Pochettino, to distraction. But on a sunny spring afternoon, when the club’s under-18s took on their Southampton counterparts to become the first players to grace the turf, the frustration seemed to melt away. Suddenly it all felt worth it.

Wow. Every supporter in attendance seemed to be wearing the same childlike expression – eyes widening in amazement, lost in wonder – when they entered the bowl. The hum of appreciation provided the soundtrack to what was the first of two test events the club must stage in order to be granted their safety certificate.

The second comes on Saturday, when a team of Spurs “legends” will face one from Inter Milan. Then, all being well, it will be all systems go for the opening against Crystal Palace in the Premier League on the evening of Wednesday April 3rd and, after that, the Champions League quarter-final first leg against Manchester City the following Tuesday.

With an outlay of more than £1 billion, it was to be expected the 62,062-seater venue would raise the bar – and it has done so spectacularly. What is particularly noticeable is how the designers have managed to retain the feel of the old White Hart Lane. Although do not call the new place that: for now, pending naming rights, it is the Tottenham Hotspur Stadium.

It is not just that the ground stands on the site of the club’s home since 1899 and the seats are in the same dark shade of blue; the lettering on the electronic boards around the perimeter are still the same and there are other little similarities.

One is the golden cockerel that now perches above the 17,500, single-tier South Stand – the venue’s showstopper. The cockerel used to occupy a position at the top of White Hart Lane but it has been recast, enlarged with the help of 3D imaging. It even features an air rifle bullet dent to reflect the one that Paul Gascoigne notoriously fired into the original.

It is the closeness of the seats to the pitch and the associated feeling of intimacy that echoes White Hart Lane. The distances from the front row to the touchline range from 4.9 metres to 7.9 metres and the stands have a vertiginous feel – mainly because the incline is set at up to 35 degrees; the highest permissible under British standards.

Everything is geared towards the optics and acoustics. Although this 3-1 win was low-key, it was encouraging to hear how the noise from the 28,987 in attendance was kept inside the bowl. As an aside, the areas at the front of the South Stand – plus another in the away fans’ section – have been future-proofed to accommodate safe standing.

Daniel Levy looked like an emperor in his seat in the West Stand, flanked by Pochettino, surveying his creation, his legacy and what a thrill it was for the young players, particularly J’Neil Bennett, who scored the venue’s first goal.

Spurs have worked to set a new standard for the match-going fan – and not just the corporates – to offer a richer, all-round experience. The stadium has an open-plan feel, in which every spectator can explore all areas – apart from the away enclosure – by walking around the concourses between sections.

There are also numerous food and drink outlets, in which the food is cooked fresh and the pints are poured using bottom-up technology in less than five seconds. The stadium is entirely cashless – fans pay with contactless cards – and the service is consequently quick, queuing times reduced. Connectivity is a priority an there are more wifi access points and greater bandwidth than in any other stadium.

It feels a little unusual to see battered tofu and chips on one menu, likewise the Naan and Noodle joint in the Market Place behind the South Stand, and the Beavertown microbrewery serving craft beers. Arrive early and stay late is the message. It is no longer about a pre-match pint and the 90 minutes.

As for the corporate facilities, they include the Tunnel Club – essentially a VIP members suite for 100 people, who can watch the players walk by in the tunnel. The club decided against the use of one-way glass because they heard that at Manchester City, where a similar set-up is in place, the players were standing in front of it to do their hair. The fine dining, headlined by the Michelin-starred chef Chris Galvin, is unsurprisingly opulent.

It is 97 weeks since the club played their final game at White Hart Lane – the 2-1 win over Manchester United – and Pochettino, who saw his son, Maurizio, introduced as a 79th minute Spurs substitute, played up the homecoming theme in a half-time pitchside interview.

“We were crying when we left White Hart Lane and now, the first day in the new stadium, we are crying again because our dreams have come true,” he said. “It’s going to be a massive help for the rest of the season. With 62,000 people here, why can’t we reach the Champions League semi-finals? It is going to be magic.” – Guardian